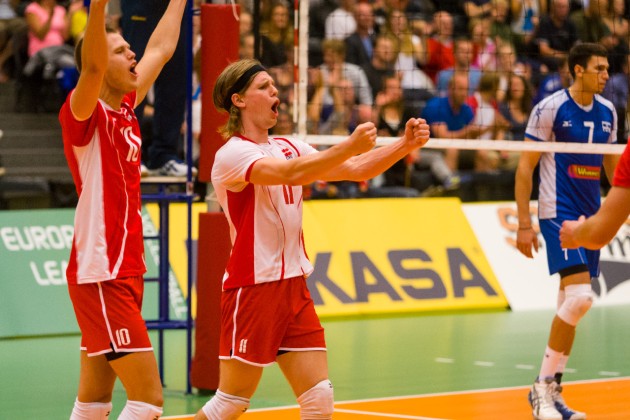 Israel was in front 8-6 by the first technical time-out. They increased the lead to 10-6 and Danish head coach Fred Sturm called a time-out. It helped and the Danish team leveled the score 10-10 in a great duel where both the Danish captain Kristian Knudsen and libero Peter Næsborg Schøler were on the floor to prevent the ball from touching. Still even at 14-14 the Danish team grabbed a 2-point lead which it held all the way to 21-21. Israel took the lead 22-21 but then the Danish team showed good mental strength and closed the set 25-22.

The Danish team came out for the second set still on top and were in front 8-5 at the first technical time-out. A Danish 5-point lead 10-5 held for quite some time before Israel leveled the set at 17-17. The Danish blocks were great and Mads Ditlevsen and Flemming Olufsen helped Denmark go to the front by 2 points – 21-19. Denmark won the set 25-19.

Denmark lost concentration in the third set which Israel led from the beginning to the end. Israel was in front 8-6 at the first technical time-out and from there they only increased their lead. Israel showed some good volleyball and was in front 16-10 by the second technical time-out. After being moving up 21-12 the Israeli relaxed a little but the set win was not in danger – 25-18.

The Danish team found its concentration again in the forth set. Yet another great block from Flemming Olufsen and Mads Ditlevsen sent Denmark to the first technical time-out with an 8-3 lead. Denmark still had a 5-point lead by the second technical time-out – 16-11. Israel had a glimpse of hope with three points in a row making it 19-15, but it was too late – Denmark won the set 25-17 and the game 3:1.

A happy Danish head coach Fred Sturm said: “Our blocks were really great the entire game and that means a lot. Like the previous rounds in Spain and Israel we play our best in the last match. I think it is because the team gets the small details in place and finds the rhythm that is needed to win. The matches here in the European League are a good preparation towards the European Volleyball Championship next year. The longer the guys are together, the better they get to know each other.”

“This victory means a lot for us. The entire team gave a good performance today. We lost concentration in the third set and then Israel showed how good a volleyball team they are. But we fought back in the game with good blocks and good morale. I am happy and have a good feeling before the last round in Slovakia next week. We have learned to play on an international level which means the world to us before the European Volleyball Championships in Denmark next year,” Flemming Olufsen added.

RUS M: VFV suggested that the Super League for men splits into two groups of 8 teams