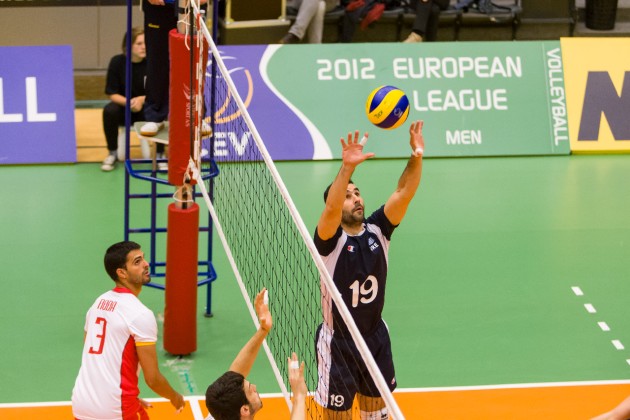 In the second match of the day Spain faced Greece.  And after a 3-2 win Spain now has 24 points from 9 matches in Pool A. Spain is still undefeated but needed a tie-break to down Greece in today’s match. In the first set Spain had an 8-5 lead at the first technical time-out. Greece kept close through the second technical time-out where Spain was in front 16-14. From here Spain just increased to 21-15 eventually winning the set 25-18.

Spain took the lead from the beginning of the second set leading 8-5 at the first technical time-out. Mitar Tzourits served great to 10-13 and smashed to 11-15 but the Spanish team was in front 16-11 at the second technical time-out. With the set win never really at stake Spain more or less cruised to the final 25-21.

Greece still with will in the third set came in front 5-4 but Spain had the lead 8-6 at the first technical time-out. Greece refused to back down and got even at 10-10 and then Spain took a time-out. Greece came in front 11-10 and had their first two-point lead at 14-12. It was already a three-point gap at the second technical time-out and when the score was 17-13 Spain used another time-out. It did not help and Greece won the set by 25-20.

The fourth set seemed to be an affair were the target besides winning was to shout the most. Both team shouted louder than normal after winning a duel in the set. Greece almost shouted louder than the music in Kildeskovshallen when they made the point to 8-5 going to the first technical time-out. At 9-5 to Greece, Spain took a time-out. Spanish Iban Perez reduced the Greek lead to 9-11. 13-15 became 13-17 in favor of Greece before Spain took another time-out. Greece increased to 19-13 before Spain answered to 15-19. The Greeks showed strong mentality and good volleyball as they won the set 25-17 and leveled the match 2:2.

Who would have thought that a tie-break was needed between number 1 and number 5 in the pool. Spain built a 4-2 lead and Greece took a time-out. The Spaniards led 8-4 when the two teams changed sides. Another Greek time-out was called at a Spanish 9-5 lead. Both teams showed great volleyball in several duels as Spain kept the margin through 11-7. A long Spanish serve made it 11-8. Great Greek fighting made it 11-9 and Spain took a time-out. How close can it be – Greece leveled the game at 11-11 and then again at 13-13. A Greek serve in the net gave Spain a match-point that was cashed in for a final 15-13.

It was a relieved Spanish head coach who analyzed the game afterwards:  “Finally all the teams are playing good volleyball. Greece made some good tactical changes today which gave us problems. I am happy with the team. They gave a good performance and fought hard. We changed the tactic a little going in to the tie-break. We were more aggressive in our serves and our blocks were solid. It was a nice match and gives us a lot too work with further on in the tournament,” Fernando Muñoz Benitez said.

Greece has played its last match in this year’s European League finishing last in Pool A with 9 points.