Serbia qualified on Sunday for the Final Four of the 2012 CEV Volleyball European League - Women. The Serbian team achieved its ninth victory in the tournament after beating Spain 3:1 (25-18, 25-10, 21-25, 25-20) in the last match of the third leg of the competition held in the Spanish city of Granollers and earned its ticket to the Final Round to be played in Karlovy Vary, Czech Republic. 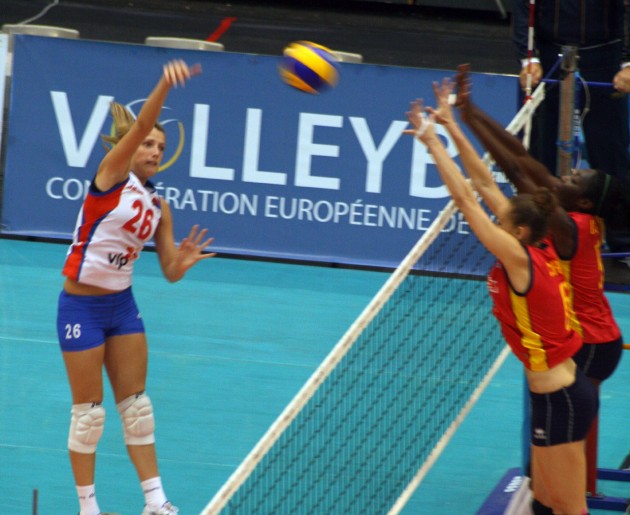 Serbia continued its impressive winning streak in the European League after beating Spain 3:1 (25-18, 25-10, 21-25, 25-20) and signed its ninth consecutive victory in the tournament. The Serbian squad consolidated its position of clear leaders of Pool A and certified its qualification to the Final Four with an impressive performance in the last match of the tournament in Granollers, achieving another positive result in the competition, this time on the home ground of the Spanish team.

The efficiency of Serbian serves and the powerful spikes by Ana Bjelica gave the Plavi squad the lead in the match, as the team trained by Ratko Pavlicevic imposed its effective display during the first two sets. The support by the local audience and the direction of setter Patricia Aranda allowed the Spaniards to win in the third period, offering some hope of victory for the home team. Nonetheless, Serbia paved its way to triumph and to the Final Four with a final set in which the visiting team controlled the recovery attempts from the Spaniards to close the period 25-20 and the match.

“Spain played a very good match.  It is a very good team and we knew it would be hard today”, Serbian coach Ratko Pavlicevic said. “We just played a little better than them today, that is why we won. We had good concentration and good motivation for victory”. As for the qualification to the Final Four, Pavlicevic said that it was “a big success for such a young group of players”.

“Serbia is a team that is able to maintain a high level of playing throughout the game and created a lot of problems to us today”, Spanish head coach Francisco Hervás said. “We tried to play with personality today. However, for us it was hard to score but we really did try and I have to acknowledge the effort of our players in the game”.

What a move by Maribor’s libero! Clears...