CEV CUP M: Stoytchev – “Winner has not been revealed yet”, Holt – “We were very efficient in block and defence”

Dinamo Moscow was too strong for Trentino in the first match of the final of the 2015 CEV Volleyball Cup – Men. Trentino now hopes for a miracle in Moscow where Italians must win the return game by 3-0 or 3-1 and then go for the golden set. 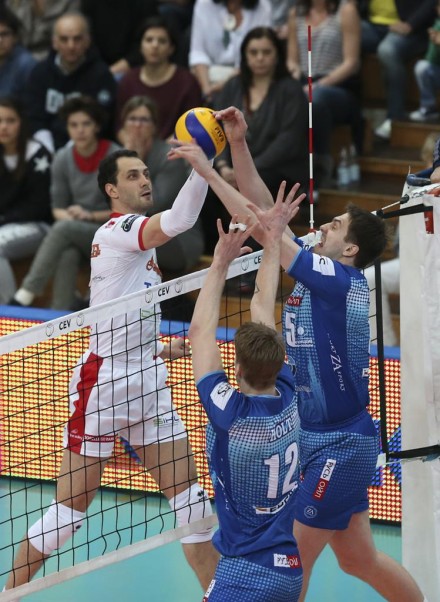 “Dinamo showed its superiority in block as in defence. I think we played below our standards, especially in attack. We could not react properly when we were put under pressure. In the third set we really began to make many mistakes, facilitating the work of our opponents that of course did not need any help. But the winner has not been revealed yet, let’s see what happens in Russia,” stated local coach Radostin Stoytchev.

“We were very efficient in block and defence, but our success also comes from a good performance in reception. It was not easy at all coming to Trento, but we are halfway on the path to the victory. Now we are expecting a tough task at home, but of course we are aware of our advantage after tonight’s victory,” said the American middle blocker of Dinamo MOSCOW, Maxwell Holt.

CEV CUP M: Dinamo too strong for Trentino, one step closer to trophy