It was history in the making this afternoon in Hard as the home heroes of Austria edged Turkey at the end of a stellar game thereby scoring their fifth win in this year’s CEV Volleyball European League, the best result ever since the guys in red and white jerseys joined that elite competition a few years ago. Austria beat Turkey 3:2 (22-25, 25-22, 21-25, 25-19, and 15-10) coming back twice from one set down and on Friday the group around head coach Michael Warm will be trying to improve its record by playing the Netherlands. 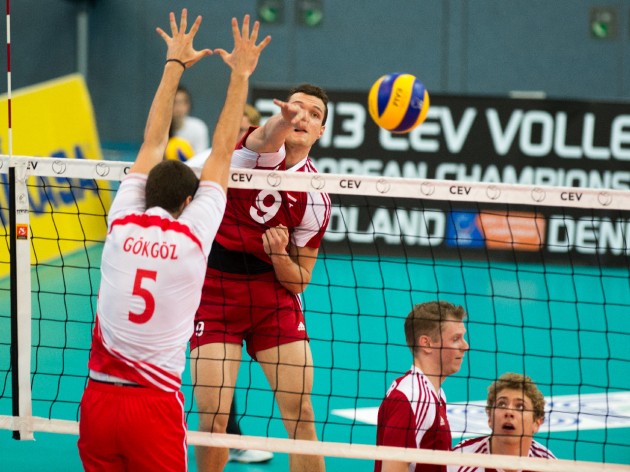 A similar scenario, but this time in favor of the home guys, followed in the second set, where Austria claimed a margin of four points after the second mandatory stop before the guests from Turkey clawed back to force head coach Warm into a time-out. This was a good move as his guys cruised to the final 25-22 to draw the count in sets.

Turkey stormed out to a provisional 8:3 lead in set 3 and even though the Austrians could close up to -2 points (20:22), still they could not avoid the final 21-25 for their opponents who stood out in blocking as well as in offense in that section of the game.

Austria returned the favor in set 4 going up 8:5 and widening the gap up to five points. Thomas Zass stepped up for the home side after the second technical time-out (21:16) and Austria could cash that set (25-19) well deservedly calling for the tie-break.

Supported by the local crowd, the Austrians dominated the scene in the deciding set going up by 3 and did not let it go, cruising to the final 15-10 after 142 minutes of tough play.

Thomas Zass and Emre Batur shared the honor of top scoring in the match with 28 points apiece with Alexander Berger contributing 20 more to the Austrian tally.

“We started nervously as my players really wanted to show their best in front of this audience” said head coach Michael Warm after the match. “They finally could get rid of the pressure and display their best. We really dominated the scene in the fourth and fifth set. Five wins in this campaign are a great result for our team but we hope we can improve our record with the next couple of matches here in Hard”.

Turkey’s mentor Veljko Basic, whose side is already qualified for the final four taking place next week in Ankara, said: “We did not play good and could not show our real level. However, we had a couple of young setters on court today and the team still has a lot to learn. I have to congratulate Austria on their win because they really played good Volleyball”.

EL M: Netherlands finish atop of the charts in Pool B