Coming off a very sharp win against hosts Japan on Friday, Germany continued their aggressive play against Korea on Saturday. It was a dominating performance from start to finish for Germany, taking the match in an hour and 11 minutes, 3-0 (25-10, 25-14, 25-20). 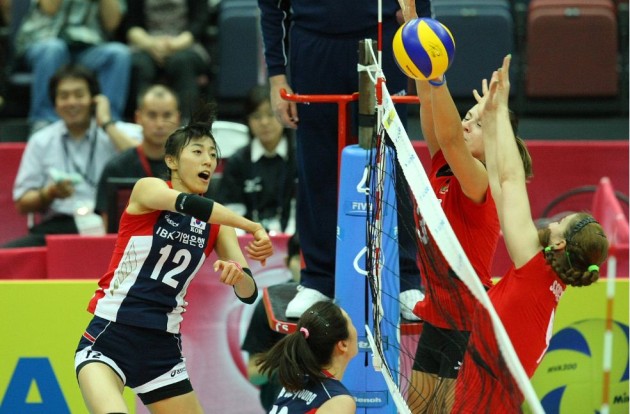 As she did on Friday, Corina Ssuschke-Voigt led Germany in scoring, putting up 14 points, including four blocks. Korea couldn’t muster much of an attack against strong German serving, with Jung Dae-Young and Han Yoo-Mi scoring seven apiece in a losing effort. Both star attacker Kim Yeon-Koung and captain Lee Sook-Ja were rested.

Germany, who had outstanding serving on Friday, were aggressive from the service line early, with Heike Beier – the tournament’s second-leading server before this match – dropping two aces to give her side a 6-0 lead. Another pair from Denise Hanke kept them out front 10-4. Germany was virtually flawless from there, as Brinker swooped in for a flying tip to make it 18-7. She pitched in wonderful blocking for Germany as well, putting her fourth stuff of the set on Kim Hee-Jin to make it 22-10. Germany would close it out on an errant spike from Korea.

Korea were better at the start the second set, with attacks from Han Song-Yi and Lim Hyo-Sook helping them stay with Germany until 7-7. But the Germans were merciless from there, scoring 11 of the next 12 points –including an ace from Kozuch and a wonderful block by Ssuschke-Voigt on Korea’s Han – to go ahead 18-8. Kozuch put Germany 2-0 up with a hard spike, her seventh score of the set.

The Koreans didn’t help their cause in the third with a flurry of early errors that allowed Germany to take a 7-2 lead. Christiane Fürst, who had taken a hard spike in the head early in the second, looked unaffected as she contributed a spike and a block to make it 10-3 for Germany. Korea mustered a small run, taking five of six scores mid-set – including three attacks from Han Yoo-Mi – to draw within four at 14-10. But Germany’s Regina Burchardt brought a pair of scores and some spectacular digs off the bench, and her teammate Lena Möllers delivered a clever tip to make it 21-14 Germany. They went on to close the set 25-20 and the match 3-0.