Japan and Korea met in World Grand Prix action on Sunday, both looking for a change in fortunes, each with loses on the previous day. But cheered on by an enthusiastic hometown crowd in Osaka, Japan took the match — though not without difficulties — 3-0 (25-22, 25-20, 27-25). 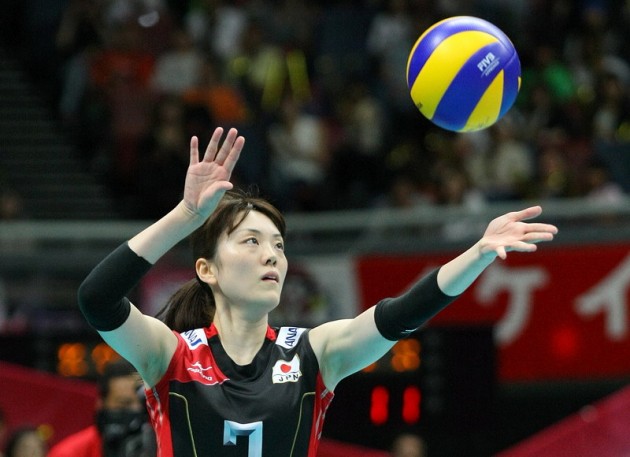 With Yukiko Ebata given a day off, Japan were led by their pair of Saoris, Saori Sakoda with 20 points and Saori Kimura with 15. Korea were led by the duo of Han Song–Yi and Kim Hee-Jin with 15 each. Kim Yeon-Koung was rested again on Sunday.

Han Song-Yi started off well with an ace for Korea to edge out 4-2, leading most of the way early, until strong attacking from Sakoda helped push Japan ahead 10-9. They would not give up the lead from there, although Korea’s Han Yoo-Mi fought hard with three scores late to close to 21-20. But a spike from Japan’s captain Araki gave Japan set point, and a floating tip to the sidelines from Saori took the first set 25-22 for the home team.

Japan brought that momentum into the third, as spectacular digging by libero Yuka Sano and a pair of blocks by Ai Otomo gave them an 8-2 advantage. Saori Sakoda brought her high-flying antics mid-set with three explosive soaring attacks, staying in front 13-9. Korea’s Han Yoo-Mi tried to spark a comeback with a couple of scores, but Sano kept providing miracle digs to keep Japan energized, a Yamaguchi ace putting them up 18-12. Saori Kimura pitched in a trio of spikes late to and Araki eventually finished with a spike, 25-20, two sets to zero.

Korea looked to rebound in the third, as Kim Hee-Jin served up an ace to edge ahead two, and then when a Araki spike sailed long they had a 9-6 lead. But Japan would tie 12-12, incredibly thanks to five straight points from Sakoda alone, capped by an ace. But Korea showed poise jumping back ahead on an ace by Jung Dae-Young to make it 18-15. Japan’s Araki and Sakoda both pitched in a pair of spikes to edge back ahead 20-19, but Kim Hee-Jin helped Korea back to to grab a set point 24-23. But Saori Kimura fought off that and another with spikes, and then brought another attack to give Japan a set point of their own. They closed on an errant spike for Korea, 27-25, three sets to zero.

WGP W: Cuba roll over Puerto Rico to clinch spot in Final Round