Indomitable USA on Sunday stretched their invincibility in the FIVB World Grand Prix after thrashing hosts Thailand for a convincing straight sets 25-16 25-17 25-7 victory in their last Pool J encounter to top the pool as expected. 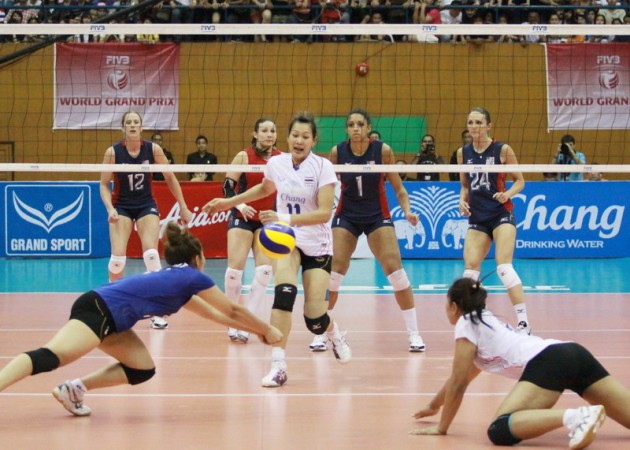 World No.1 and reigning two-time champions USA opened up aggressively, using their height advantage to block the Thais effectively and jump to a 5-1 lead. Powerful Megan Hodge punctured the Thai defence into shreds with her exceptional spikes to move the USA ahead 7-1 and 9-4.

Thailand fought back bravely, with hard-attacking Onuma Sittirak attempting to overcome the much taller blockers and Amporn Hyapha coming from behind to find gaps in the formidable rivals.

Seeing his team trail in vain 12-19, Thai head coach Kiattipong Radchatagriengkai asked for time-out to improve his team’s fortunes. Still, it could not help that much when the high-profile USA stormed on their brilliant form. Young Thai player Sonthaya Kaewbundit dropped close to the net to help the host side narrow the gap 16-23, but Hodge jumped high at the post to fire a deadly spike and give the USA the setpoint. Christa Harmotto hit the smaller blocker with a fierce spike for the vistors’ 25-16 win in the first set.

The rhythm was still with the USA in the second set when they captured the pole position 8-5. Thailand gathered their courage and determination to hit back impressively. The consistent play moved Thailand to come close at 8-9 and 11-12. However, they became more prone with unforced mistakes and poor reception. After a few counter-attacks from Thailand, the USA remained in devastating form. They tore the Thai defence into pieces with mighty attacks to win the thrilling set 25-17.

The third set became a complete one-sided battle. Kristin Richards and Hodge turned smashing machines for the USA. Their lightning spikes were unchallenged and the USA were just unstoppable. Leading commandingly 12-4, courtesy of explosive Richards’ sizzling spikes, the USA found it more comfortable to cope with the Thai techniques.

The USA advanced to 19-7 and from then on never looked back. Showing no mercy to the host side, the USA performed superbly to win straight six points for the eventual 25-7 win in the set and the absolute lop-sided encounter.

Juantorena to semifinals of popularity contest