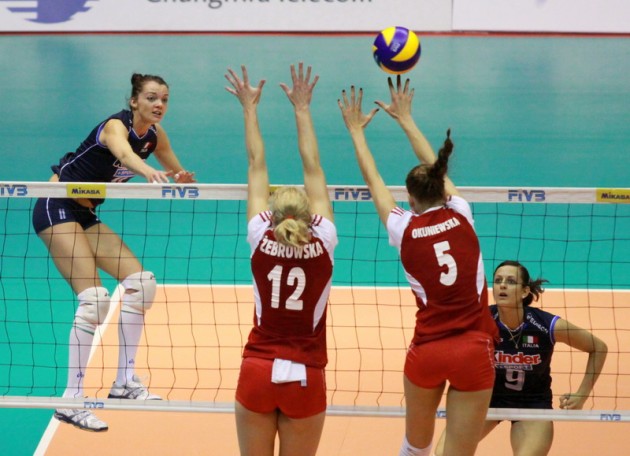 Poland led in the first set, and had a four-point lead until Italy managed to catch up at 22-24 and 23-24. Poland had to call for two timeouts in a row before a quick spike from Agnieszka Bednarek–Kasza sealed the set.

Italy began aggressively at the beginning of the second set but Poland levelled at 6-6. The two teams struggled to and fro until Poland were able to wrestle the lead at the second TTO 16-14. Italy called for a time-out at 17-19, but Poland drew away at 22-18. Poland performed two solid blocks and Italy then sent a serve long to gift the Poles the set.

Poland then lost concentration at the beginning of the third set and Italy were able to lead at 18-13. But Poland pulled themselves back together, and managed to level the scores at 18-18. However, World Cup holder Italy proved their excellence, edging the set 26-24.

Italy surged ahead in the fourth 14-11 forcing Poland to call for a time-out. Italy kept on with their dominance, as captain Serena Ortolani put through several powerful spikes, helping her side take the match to a tie-breaker.

Poland regained their composure at the beginning of the tie-breaker and took a 3-0 lead, but Italy showed their determination for victory, levelling the scores at 5-5. Captain Ortolani scored two aces and led her team to 10-8. Each team displayed spectacular tips and defence, however a solid block from Italy saw them seal the win.