Defending champions USA rallied past Brazil in a five-set thriller on Wednesday for an opening victory at the women's volleyball World Grand Prix finals. 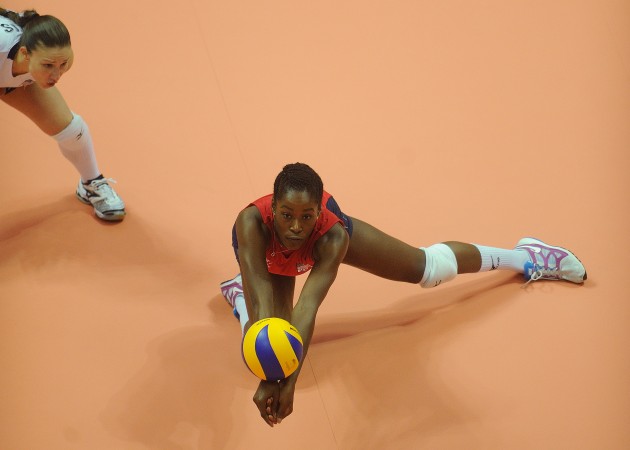 A good save of Megan Hodge, who led the USA to the victory with team-high 16 points.

The Americans overcame a slow start in the opening stage and rallied from 1-4 to lead into the first TTO 8-7, Christa Harmotto contributed a powerful spike and an ace for the 5-1 run of the United States.

When the game resumed, the Americans successfully limited the Brazilian offense with strong serving and jumped to 12-7. The USA then enlarged the gap to 17-11, forcing Brazil’s head coach Jose Guimaraes to call a time-out. Brazil managed to pull with 16-20, but the Americans claimed the first set 25-19 as Megan Hodge, who led the USA with 16 points, sealed the set with a high-flying curve.

The top two teams in the world have already met at the preliminary stage in Brazil with USA winning 3-1 on June 17. USA qualified in impressive style for the finals without losing one single point in nine matches, conceding only two sets along the way while Brazil finished in fifth.

The United States fought hard early in the second set and managed to stay up at 8-2, but Fabina Claudino led the Brazil team steadily pulled it back at 10-11 with a series of powerful spikes before staging a 4-0 run on back of stormy services of Jaqueline Carvalho to take over the lead at 14-12.

But the Americans fought back with an amazing 7-0 run to go up again at 21-16 and never looked back.

In the third set, Brazil found back their trademark offense as Carvalho prevailed with great hitting efficiency. Jumping to an early 5-1 lead and maintained the four-point advantage most of the way. Carvalho, who scored 8 of her 12 points in the set, smashed home to give Brazil the set point and Marianne Steinbrecher finished the set 25-19 with a kill.

The two teams played more consistently in the fourth set where Brazil managed an 8-4 lead to enter the first TTO and improved to 18-11 thanks to a bunch of errors from the United States. The Brazilian women cruised to the victory of the set at 25-13 with an 8-1 run capped by Steinbrecher with a speedy spike.

Paula Pequeno, had 14 points, scored three in a row to lead the Brazil to a 5-3 lead in the deciding fifth set. But then the Brazilians got sloppy and the United States overtook the lead at 10-9, Guimaraes had to call a time-out.

At the crucial point, the Americans came up big and Hodge gave them match point at 14-11 and a high-flying spike from Harmotto ended the match.

WGP W: Hugh McCutcheon – It is a good start for USA