EL M: The Netherlands shuts out Slovakia to make it to the final in Ankara

The team of the Netherlands became the first one to secure a place in the big final of the 2012 CEV Volleyball European League - Men. The Oranjes shut out the reigning champion of the competition Slovakia by 3:0 (25-15, 25-23, 26-24) in the early semifinal at Baskent Volleyball Hall in the Turkish capital Ankara. 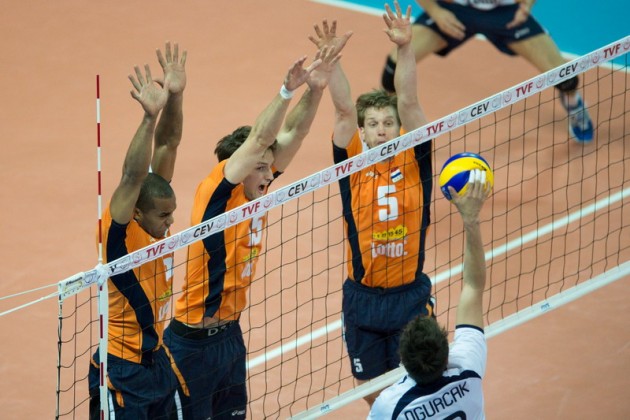 The first set was pretty even through the first technical time-out.  Then the Dutch scored 6 points in a row with Humphrey Krolis behind the serving line to move the result from 9-8 to 15-8 and set the tone for the rest of the set.  While the Dutch attacks were very efficient, the Slovaks made too many unforced errors and had difficulties breaking through the opponents’ block.  Edwin Benne’s team continued to extend the gap and a successful spike by Thijs Ter Horst closed the set at an impressive 25-15.

Slovakia stepped up its blocking efforts in the second set and this resulted in a way more disputed battle on the court.  Both teams increased the power of their serves, but this proved to be more useful to the Oranjes as they piled 3 aces in this set.  The win in this second part was up for grabs almost through the entire set, but in the end it was Jelte Maan who put the ball on the floor twice in a row to score the 24th and the 25th points for the Netherlands.

Already two sets behind, the Slovaks tried to come back into the match in the third.  With improved collaboration between setter Branislav Skladany and opposite Milan Bencz they were able to pull a 5-point lead at 12-7, but it did not last long.  The score was tied again at 13-13 and then it was a roller-coaster through the end of the set.  Prolific serving by the Netherlands (5 aces in this set!) and some good blocking by Slovakia produced a few changes in the lead, but in the end it was again Jelte Maan whose spiking efforts brought his team the success in the conclusive moments of the match.

Maan was the best scorer of the winning team with 13 points, while Bencz scored 2 more to claim the top of the scorers’ chart in this match.

”I congratulate the Dutch team for their performance today.  They played better and deserved to win the match,” Slovak captain Branislav Skladany adnitted.  ”It was a tough match.  We played with young players like Nimir Abdel-Aziz, and I believe we did a good job”, Dutch captain Jeroen Rauwerdink added.  ”We served and received well throughout the match. We had some difficulties in reception in the final set, but after the second technical time-out we took control and were successful in the end.”

”The Netherlands put more heart into this game,” Stefan Chritansky, head coach of Slovakia, stated.  ”We did not do well enough in reception and serving.  Although we were in the lead in the last set, we could not finish it successfully. Our players were not so good, especially mentally.”  Dutch mentor Edwin Benne, on the other hand, was very satisfied with the game and the result: ”We were more eager to win.  I am happy with our team’s performance, especially in serving and reception.  We are trying to add to our performance after each match.  We are now looking forward to the final match tomorrow.”