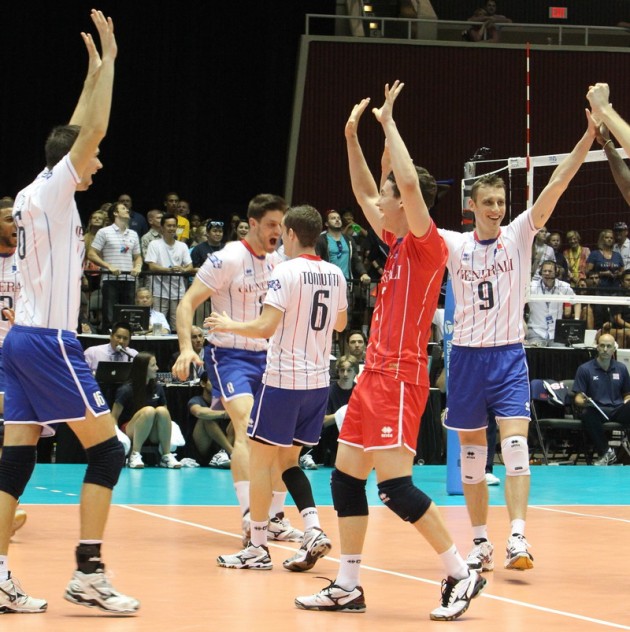 Despite the five-set loss, the U.S. maintains the Pool C lead with 24 points while France has 21. However, France could win the pool on Sunday with a win over Korea and a U.S. loss to Italy.

France’s Antonin Rouzier led all scorers with 21 points on 18 attacks and a match-high three aces. France’s Kevin Tillie added 19 points on 18 spikes and one block. Matt Anderson paced the United States with 18 points on 15 attacks and three blocks. France led the U.S. in spikes, 75-61, and aces, 9-0. The U.S. led 19-5 in blocks, with Donald Suxho, Reid Priddy and David Lee each credited with four.

The score was tied 6-6 in the first set when France scored three straight points, including attacks from Marien Moreau and Kevin Tillie. France extended its lead to seven at 19-12. With France leading 20-14, the U.S. men scored three straight points on two spikes from David Lee and one by Priddy to pull to within three at 20-17. The U.S. later cut the lead to two at 21-19. But that was as close as they got as the European side pulled away, reaching set points at 24-20 and winning on a U.S. hitting error.

France took an 8-6 lead at the first technical timeout of the second set. France still led at 11-8 when it got the ball back on France’s service error and scored three more points on attacks from Anderson and Holmes and a block by Holmes and Priddy to lead 12-11. The teams battled back and forth until the score was tied 14-14. Lee scored with an attack to spark a 5-0 U.S. run that put the North American side ahead 19-14. The U.S. reached set point at 24-20 on a Priddy strike. France scored twice on a Trefle attack and setter dump. The U.S. called timeout and Anderson won the set with a spike.

France took an 8-6 lead at the first technical timeout of the third set and maintained it until its lead was 17-15. The French scored twice, including an ace from Antonin Rouzier to lead 19-15. The U.S. called timeout and France’s next serve went out of bounds. The U.S. scored three straight points on two blocks and an Anderson attack to tie the score at 19-19. The score was still tied at 23-23 when Lee gave the U.S. set point with an attack and France hit the ball out of bounds to clinch the set for USA.

France held an 8-5 edge at the first technical timeout of the fourth set. The U.S. came back to tie the score at 8-8. The teams battled back and forth until the United States led 13-12. Rouzier scored on a spike off the block, then added two aces and another attack to give France a 16-13 lead at the second technical timeout. With France leading 21-17, the U.S. scored on France’s service error and a violation to pull to within two at 21-19. France called timeout and Samica scored on an attack. France reached set point at 24-22. Stanley scored with an attack for the U.S. before Tillie won it for France with a spike.

France took a 3-0 lead in the tie-breaker and still led by three at the side change, 8-5. The United States pulled to within one point at 12-11 and 13-12. France reached match point at 14-12. Holmes scored with an attack, but Rouzier won the match for France with an attack off the block.