FIVB Heroes to star for volleyball in London

With the London 2012 Olympic Games just over three weeks away, the FIVB Volleyball World League Finals were a chance for numerous FIVB Heroes to pit themselves against each other in a final test before the battle for Olympic gold kicks off. With national men’s teams from Brazil, Bulgaria, Cuba, Germany, Poland and USA competing in the Finals, six FIVB Heroes, Murilo Endres (BRA), Tsvetan Sokolov (BUL), Wilfredo Leon (CUB), György Grozer (GER), Bartozs Kurek (POL), and Clayton Stanley (USA) were present. Of these, all except Wilfredo Leon of Cuba, whose national team has not qualified for London 2012, will have the opportunity to represent their country and the FIVB Heroes campaign during the Olympic Games, where the FIVB - for the first time ever - will showcase the sport and athletes through several promotional activities within the official Olympic volleyball and beach volleyball venues. 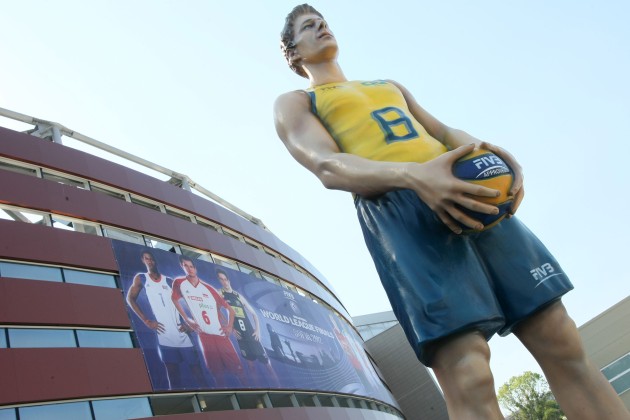 In front of Armeec Arena – Sofia

For these world class athletes the FIVB Volleyball World League Finals has provided a fantastic opportunity to fine-tune their game as well as interact with fans and promote the sport they love ahead of the biggest stage in world sport. “The FIVB Volleyball World League Finals means by definition you are always competing against the best in the world, so there is no better chance to see how you measure up before an occasion such as the Olympic Games”, said FIVB Hero, Murilo Endres of Brazil. “The Olympic Games are the pinnacle of every sportsman’s career, and just to take part in them is an immense honour.”

The first men’s volleyball match of the Olympics is on July 29 at Earls Court with the hosts Great Britain playing Bulgaria. Underlining the importance of the Olympic Games for the promotion of the sport, FIVB President Jizhong Wei said “The FIVB is very excited about the unique opportunity offered by the IOC and LOCOG to showcase the FIVB Heroes campaign at the London 2012 Olympic Games. We will be presenting our sport and its top players through our campaign activities, which will support LOCOG to enhance the overall spectator experience. The Olympic Games are a top platform to bring the spectacle of volleyball to the world and to even reach a new audience who have so far not been in contact with volleyball. We would like to introduce them to our sport, which reflects excellence, teamwork, integrity and fairness – for which our FIVB Heroes stand.” By presenting its sport and athletes in such an innovative way, the FIVB aims to create a legacy for both volleyball and sports fans worldwide.

With both disciplines set to feature on the world’s biggest sporting stage, the FIVB will put in place a number of activities to boost awareness and enhance the spectator experience including: two five-metre-tall statues of FIVB Heroes as well as banners and free-standing ‘shards’ showcasing individual Heroes which will grace key locations at both Earls Court (volleyball) and Horse Guards Parade (beach volleyball). Information-graphics explaining the sport will be shown to waiting fans at Earls Court and a celebrity beach volleyball match will be staged on August 7 at Horse Guards Parade. An FIVB Lounge at Earls Court and FIVB House at Horse Guards Parade will also welcome specially invited guests, showcasing potential hospitality opportunities at future FIVB flagship events. All the branding has been integrated into the official look and feel of the London 2012 Games. FIVB Heroes will also be involved in fan and media events and activities during the Games.

The men’s FIVB Heroes team for the Olympics includes the following players:

The women’s FIVB Heroes team for the Olympics includes the following players: