USA derailed Bulgaria 3-0 (25-21, 25-16, 25-17), thus breaking two teams' hopes in the 2012 World League. The home team was hoping for a good performance and Germany - for a ticket to the semifinals. Neither of those happened because of USA's fantastic defence and infinite mistakes by the Bulgarians. 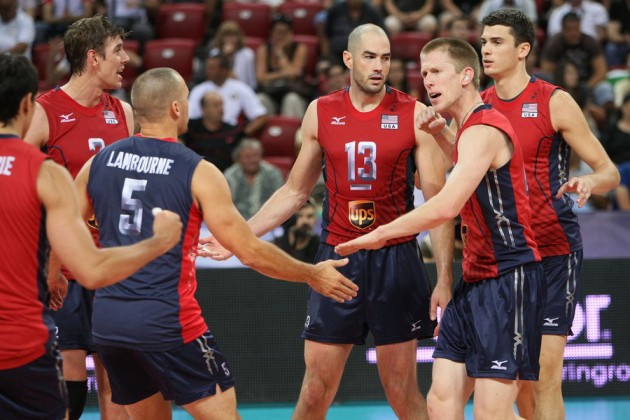 After a long rally, the first point went to USA, but then it was a really tied game up to the first technical time-out at 8-6 to the American team. A few successful spikes, a mistaken serve and Valentin Bratoev`s ace allowed the Lions to catch up soon. The 14th point for Bulgaria came really hard after some great digs by both teams. However, the 16th was for USA against 15 for Bulgaria. The Balkan Lions were not ready to lose, but with 10 unforced erros in just one set and fantastic Sean Rooney on the other side, USA prevailed – 25-21.

The Americans, led by David Smith and David Lee, found out how to put pressure on the Bulgarians and make them mistake.  The first technical time-out came at 8-5. The US team was playing smoothly and probably because Bulgaria had already made its way to the semifinals, it was not showing nice actions. Still leading after the second technical time-out (16-11), USA kept killing the Lions with their attacks. Eventually they won the set by 25-16.  No matter how well he was playing, Sokolov, the young FIVB Hero, who scored 8 points in the set, could not help his team get bacl into the match.

It was a good start for Bulgaria in set 3 and the tied game seen in the first set continued in this one as well.  Nevertheless, USA was still leading at the first and the second technical time-out (8-6, 16-13). Alan Knipe‘s boys just looked fantastic in defence – great passing, incredible digging, powerful attack. Even the almost fill hall could not help the home team stay in contention.  The US team was playing without any pressure and its attacks kept being quite successful and effective. Bulgaria could not narrow the gap down and the last set was won by the Americans at 25-17. Mathew Anderson and Sean Rooney impressed with 15 points each.

In today’s semifinals, the Lions have to show their skills against the top team from the other pool – Poland, while the Americans will enter a battle of the neighbors against Cuba.