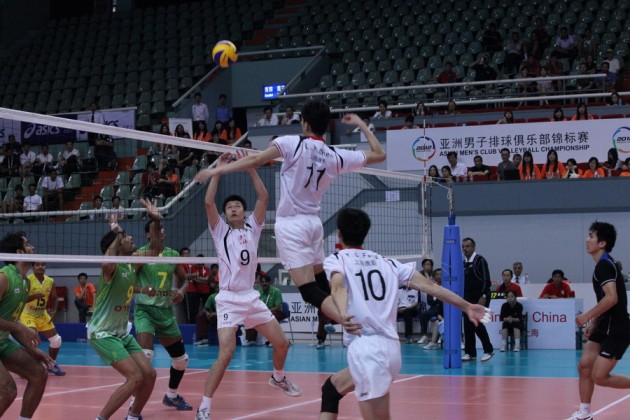 Reigning champions Iran overwhelmed Japan 25-15, 25-18, 25-17 and Qatar outclassed Thailand 28-26, 28-26, 25-17, on Friday. The two winning sides advanced into the semifinals. Luwan Gymnasium witnessed the game of the day as China‘s Shanghai Tangdynasty were toughly challenged by India. The set scores clearly demonstrated how close the two sides were in their battle for a semi-final berth. China made it 14-11 soon after the starting whistle. But the Indians managed to level the score taking four points in a row on the power of serve and effective blocking. The Indians continued their aggressive play to make it 22-20. But the hosts came from behind to lead 24-23, before taking the first set 25-23. The Indians came back strong and took a 4-1 lead early in the second set. The lead changed hands several times before India came to the front 23-21. The scores tied six times to stand at 29-all. China grabbed two more points to take the set 31-29. The third set saw both sides mis-served from time to time in a sea-sawed game. China tried to play a patient game and, through power serves and taking the chance of India‘s unsatisfactory on-court cooperation, managed to win the set 25-22 and the match. Shanghai Tangdynasty head coach Wang Jian admitted his team suffered a lot from the unfavorable pool play schedule. With the withdrawal of the United Arab Emirates and the much delayed arrival of Afghanistan, Pool A shrunk to just three teams — Vietnam, China and Afghanistan. And today’s was only the second game for China, who beat Vietnam 3-0 on Tuesday.

“We had two days off after our first game. This affected the consistency of our game, which was further weakened by losing two back-bone players who were injured either in game or during training,” Wang said.

China‘s vice-captain Wang Zhiteng said:“Both sides played with their best efforts today. As we had much less games to play during the preliminary round, our players have not yet reached their peak form.”

In the semifinals on Saturday, China will face Kazakhstan, who swept over Vietnam 25-16, 25-17, 25-16, while Iran play Qatar who downed in another quarterfinals match on Friday.