Poland disappointed Cuban hopes for first place in Pool F of the 2012 FIVB World League finals, defeating the team from Latin America 3-0 (25-23, 25-20, 25-23). Seventeen points from Zbigniew Bartman as match top scorer and a further 11 from Piotr Nowakowski gave the Polish team the advantage as Cuba was lacking their main opposite Rolando Cepeda. 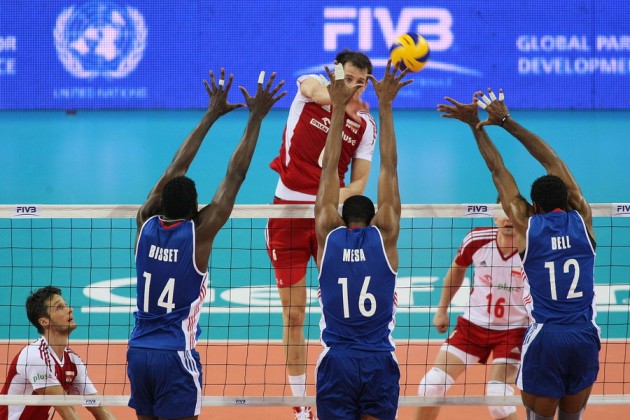 Bartosz Kurek and the Cuban block

Having no pressure as they were already at the semifinals, both teams looked a little bit loose. Supported by the 2000 fans at Arena Armeec, the Polish team started smooth and took the first lead. The Cubans tried to get back into the set but even 10 points from Yordan Bisset could not help them.  In the end the Polish team was more consistent to win the set 25-23.

Cuba continued to try hard, but it was just not their day. Still the match was tied mostly because of unforced errors by both teams. The power of the Polish attacks and the much better reception gave Druzina Polska some advantage and made the difference. Cuba was not only lacking Cepeda‘s jumps but there was not much to be seen of the powerful spikes by the youngest FIVB Hero – Wilfredo Leon. Even in this situation Poland had to work hard to take the set by 25-20.

Poland performed with much smoother defence in the last part and this gave them a real jump-start to overcome the rivals.  The set was tight like the previous two, but Bartman and Nowakowski pressured Cuba with powerful serving. Captain Marcin Mozdzonek contributed some stability in the end, so the Polish team won confindently – 25-23.

With the three points which Druzina Polska gained with the victory against Cuba it finished top of Pool F leaving Cuba in the runner-up position.