The home heroines of Belgium opened their campaign for making it to the final round of the 2012 CEV Junior Volleyball European Championship by downing their opponents from Romania in three straight sets (25-20, 25-14, and 25-23) on Friday as the stands of the “EuroVolley Center” were filled up to full capacity by their fans. 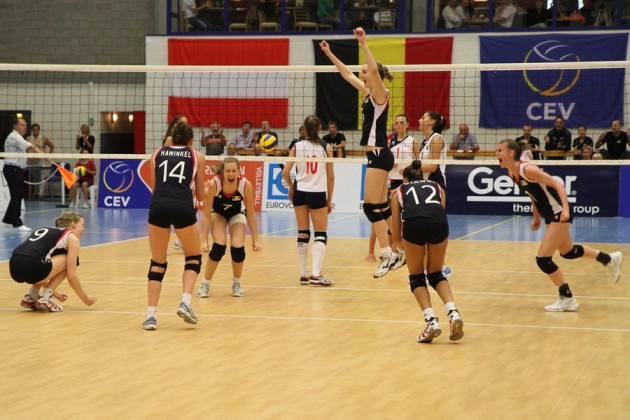 Actually Romania had briefly set the pace of the match in the opening set going up 14:12 there via the support provided by middle blocker Sabina Morth. After a time-out asked by their coach Julien Van de Vyver, the home favorites stormed back by claiming the next seven points with the blocks of Celine Van Gestel and Line Hervent combined with the spikes by Sarah Coppens contributing the final 25-20. The second set turned into a real debacle for Romania as the home girls defended extremely well, blocked with good consistency and moved quickly up to a terrific 16:4. Only a drop of concentration by the Belgian ladies could help Romania make the score less embarrassing at the end of the set (25-14). Set 3 was very close with no team going up by more than 2 points but in the end Celine van Gestel – best player of the match – and the last addition Karolina Goliat could finish it off in straight sets for the home side.

In the second match of the day Germany easily disposed of Austria in straight sets (25-19, 25-21, and 25-15). Germany did not have it easy in the opening set especially as Austria served extremely well but gradually stepped up with the blocks by Carina Aulenbrock, the good defense and attacks of Nele Barber and Lisa Izquierdo. Srna Markovic tried to keep alive the chances of Austria to stay tuned in the score but the set ended in a 25-19 for Germany. The same scenario unfolded in the second set with Austria keeping the score close up to the first technical time-out (8:7) but then it was Izquierdo who made the difference for Germany, moving the score up to 19:12 and scoring more and more to seal the final 25-21. The third set was one-sided and Germany cruised rapidly to the final 3:0 with good serving and excellent blocks while Austria made a lot of errors in defense. “We were the real surprise of the second round but we knew it would be quite difficult for us to repeat that same performance here in Vilvoorde” said Austrian team manager Heinz Hofstetter after the match.

HON M: Guatemala and Costa Rica lead pools in U-23 of AFECAVOL

You should definitely consider this volleyball practice...