Argentina wasn’t brilliant against Tunisia, but only the win counts at the end of the match. South American side has reached third victory in five rounds at the 2015 FIVB World Cup in Japan 3-0 (25-20, 25-19, 25-20). Lucian Zornetta and Maximiliano Gauna had both 11 points in winning team. Hamza Nagga scored 18 in Tunisia. 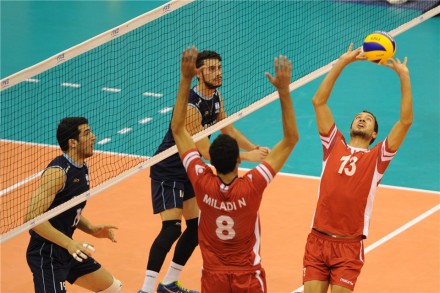 Each team started the match nervously, making too many service errors, but unlike Argentina, Tunisia was good in blocking, especially Ben Othmen and took 7-4. Argentina struck back in the same style over Zornetta and Gauna for 11-all. Conte, the best scorer of Argentina so far, has been fully woken up in the second half of the set 21-17. Solé spiced things up with two consecutive aces on 23-20, although one was challenged 25-20.

Tunisians began Set 2 just like first one, with blocking, 4-0. Nagga kept the pace of his team and Argentina was in trouble 10-5. The key moment of the set, probably of the match as well, occured on 13-9 for Tunisia when Argentine coach Velasco challenged referee’s call. Poglajen’s wide spike was annulled by the net touch from Tunisians and instead of 14-9 it was 13-10. Argentina won next three points and soon took the lead thanks to Solé and Poglajen. Set 2 ended like Set 1, with an ace, this time from Gauna.

In Set 3, two mighty kills from Nagga and ace from Moalla caught Argentina unprepared. So, South Americans had a slow start of another set 5-2. Sets 1 & 2 COPY – Set 3 PASTE, that’s how Argentinians played today. Zornetta and Solé found their way to crack Tunisian defense, Argentina made a turnaround 8-4. Afterwards, South American team didn’t allow opponnet to reach this gap despite having many ups and down in its play. Solé took care that his team even increase advantage and claim third win in the tournament 25-20.

OG: FIVB to use technology to improve...