Canadian national team caused upset in the fifth round of the 2015 FIVB World Cup in Japan! Without its best player Gavin Schmitt, North Americans downed Australia in the tiebreaker that was more than a dramatic 3-2 (32-34, 25-15, 25-21, 27-29, 20-18). Australians were also handicapped with the absence of the new FIVB record holder Thomas Edgar for the most part of first three sets. 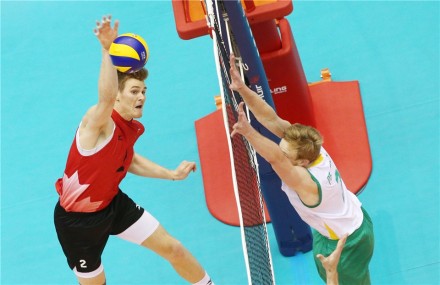 Australians took the first set, but they had to fight hard for it as they dropped a four-point lead 16-12. Edgar’s substitution in starting lineup Paul Carroll was unstoppable.

Since Canadians made a comeback, the head coach of Australia Roberto Santilli decided that he shouldn’t continue to rest Edgar and sent him on the court from the start of the fourth set. Edgar entered as substitution in 1st and 3rd, missed 2nd. That move by Santilli gave his team 29-27 in Set 4, of course thanks to Edgar.

The tie-break was a roller coaster. „Volleyroos“ had 3-0 with Edgar’s powerful spikes, but Justin Duff annulled it with two consecutive blocks. Autralians went up front 5-3 and 11-8, but Perrin’s and Winter’s shots were always precise when necessary 11-11. It was visible that Edgar needed a lot of time to catch the rhythm because he was sitting on the bench for too long. Australia had the match ball at 14-12 and failed to finish it. Canadians were more concentrated 20-18.