Canada achieved third win at the 2015 FIVB World Cup in Japan. It was a tension-free game against Venezuela in Tokyo as both teams are playing the rest of the tournament relaxed 3-0 (25-18, 25-22, 25-23). But, the South Americans have played maybe a little bit too relaxed… 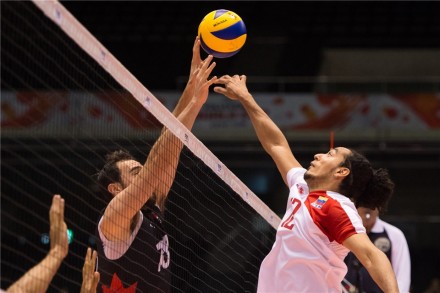 Canadians opened duel with some excellent blocking that gave them result initiative 5-3. Although Venezuelans equalized quickly, three consecutive aces from Jansen returned them into inferior position 13-9. When Sanders and Duff also scored an ace it was all over in this set and we must say – Venezuela was ashamed by Canada. This kind of poor reception wasn’t seen yet at the tournament… 25-18.

Venezuelan players brought together in the second set in order to keep their honor. This time they didn’t have so many poor digs, but failed to properly attack the opponent who had Perrin on fire 10-5. Canada didn’t play some spectacular volleyball, must be admitted, but several precise spikes and two-three blocks were just enough. Venezuela somehow approached to 23-22, but two in a row from Canadians have done it 25-22.

The only initial lead that Venezuela had in some set was in third, thanks to Rodríguez 5-3.  But, the same player committed a few errors in a row soon afterwards and Canada took 12-9. Perrin and Schmitt combined strong shots to keep North Americans ahead 20-18. Barretto gave his best in the finish, but Schmitt scored last three points of his team in the game for 25-23.

Top scorers: Schmitt in Canada with 16 points and Emerson Rodríguez with eight in Venezuela

ONE ON ONE: Giannelli’s amazing block on Muserskiy, Russian giant couldn’t believe!