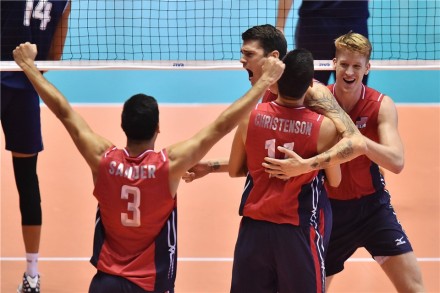 Anderson and Sander pulled USA up front at the start 6-3. Argentina didn’t let things to get out of its control and came close with Solé’s block 8-7. But, USA had Russell who was just perfect! He took his team to 13-9 followed with devoted defensive play of libero Shoji. Argentinians approached again 20-19, but Russell fired two consecutive spikes at 21-10. Anderson finished the set with huge one-on-one block on Conte 25-20. Russell was flawless in Set 1, spiking 8/8!

Argentina opened Set 2 with a couple of blocks 4-3, but USA’s players made a shower of aces, pouring them whenever necessary. With two in a row from Anderson, it was 17-14 for Americans. Argentina got 19-18, but Russell scored from a service line 21-17. The decisive point occured at 22-20 when USA won a long rally. Sander sealed the set with a kill and ace 25-21.

From the beginning of Set 3 it was visible that Argentina tries its best to spoil American plans 6-4. US team temporarily went up 8-7, but Argentina had 7-0 run at 9-9! Palacios and Conte were firings pins in South Americans’ offense during that period of game. Conte’s ace for 21-13 was icing on the cake. US team tried to return to the set with three points in a row, but four consecutive points from Argentina and first tempo from Crer marked the continuation of Tokyo battle 25-17.

Argentina entered Set 4 very nervously, gifting points to US team 8-5. American duo of middle blockers Holt – Lee gave their team confident 12-8 lead. Then, Sander took over 17-11. Russell’s spike and Christenson’s ace destroyed already poor Argentinian reception in this set 20-12. Argentina scared Americans with two points in a row at 24-18, but Holt smashed first tempo for a huge celebration on the court by the guys in red jerseys!

THE BEST POINT OF WORLD CUP! US libero Shoji scores from edge of field! (VIDEO)

I wanna cry 🙁 Cheers to all teams and fans all of the world, this tournament is sick.