The “Knjaz Milos” company recently joined forces with the club of Crvena Zvezda BEOGRAD and one of the most popular brands there in Serbia, i.e. Aqua Viva, will be the official water supplier of the “Red Star” teams that are set to join this year’s CEV Volleyball Champions League. An ad-hoc sponsorship agreement was signed today in Serbia’s capital city by the General Director of “Knjaz Milos”, Milan Vujovic, and the Secretary General of Crvena Zvezda, Ana Avramovic. 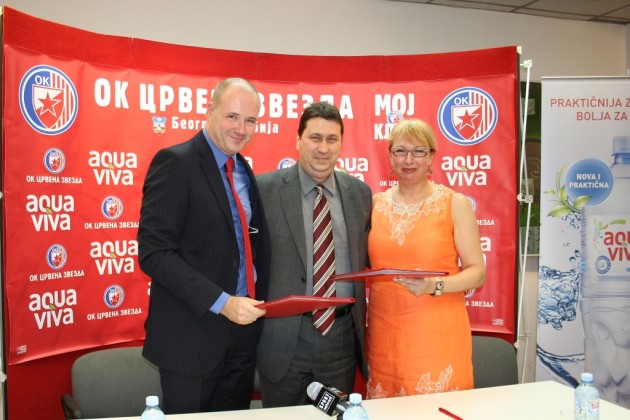 “We are working very hard to get ready for our campaign in Europe’s most elitist competition and we are very glad to present our first sponsor Aqua Viva that will accompany our players in all of their Champions League matches” said Mrs. Avramovic. “We are doing our best to make sure we will be able to organize our home matches at the highest level” she added.

The Vice President of Crvena Zvezda club, Zoran Manasijevic, presented Milan Vujovic with a special plaque right before the signing of the agreement which comes into force after the officials of Red Star started some days ago a special campaign under the motto “October 2012” thereby trying to get together a pool of sponsors to support the Champions League adventure of their men’s and women’s teams.

WL: Japan without Fukuzawa and Fukatsu