The coaches of the participating teams are all looking ahead to what is expected to be intense and exciting six days of matches in the seven-team 14th Senior Men's Caribbean Zonal Volleyball Association (CAZOVA) Championship which serves off on Monday. 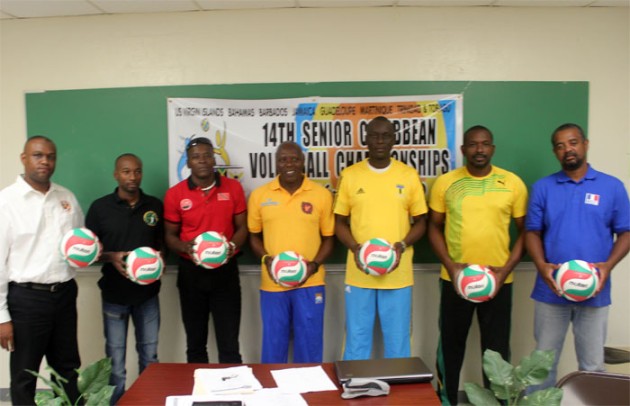 On the heels of the opening day of competition the coaches all expressed their views on what to expect from their teams and which rival they consider as major threats.

Barbados (Ludger Niles): “We think we are well prepared as our preparation went well. The team is a very balanced one of youth and experienced as we have brought back three senior players who missed the 2010 tournament, as well as having four newcomers, one junior and they are all Under-23. Overall I think we stand a good chance of claiming the title. The competition will be intense as we are already in a tough group which is going to be difficult.”

Bahamas (Davince Smith): “We have been training for four months and our team is young one but we hope to improve from our third place finish in 2010. This year we have focus a lot on defence at the net and backcourt in our training but we will also be missing a key player in Shedrick Forde through some administrative problems. Now we have to refocus and fill that void left by Forde.“

Guadeloupe (Ismael Olivier): “We have a group of 12 players who all in the Championship Division of the Guadeloupe Volleyball League and we have been preparing for the tournament for the past wo months as best as we can. This group of players is expecting to do the same as our fourth place finish in Suriname two years ago or better than what we did. Some of the guys from the previous team are part of this group as well which brings a level of experience and confidence.”

Jamaica (Steve Davis): “Our expectations here are to try and improve in every match as take it one day at a time. We have a good blend of youth and experience even though we have a short staffed team of only eight players due to lack of finances we intend to fight hard.“

Martinique (Eddy Erialc): “First things first we are happy to be here once again having missed out on the 2010 Championship after we won in 2008 in Barbados. “We are here to compete for the gold and among our squad is six members of the team which won in 2008. We expect it to be tough especially our first round group which includes T&T, Jamaica and Barbados because they have all gained some experience in the time we have not participated in some time.”

Trinidad &Tobago (Gideon Dickson): “We came here to defend our title and showcase what we have been learning at the higher level of competition at the NORCECA level since claiming our first ever regional senior men’s title in Suriname two years ago. From that team we have no fewer than four changes but we are very confident of our chances to retain the title despite coming off a cellar-placed finish at the Men’s Pan American Cup in Santo Domingo on Saturday.”

US Virgin Islands (Mark Daniel): “Our team has been training individually and separately for a few months due to the players being from different islands but we have managed to put together a good group of experience players with some young talented ones and we are confident that we have the right mix. In these types of tournaments it comes down to which teams finds its chemistry quickly will do well.”