After they won the European gold, Russia is now at the top of the European Ranking which was updated following completion of the 2015 CEV Volleyball European Championship – Women. 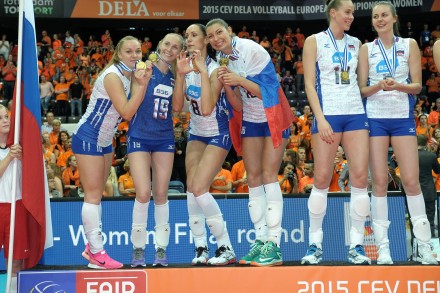 The current ranking also determines the eight teams that are set to fight for the sole ticket at stake in early January in Ankara, Turkey, to join Serbia – runners-up from the 2015 FIVB Volleyball World Cup – as part of the European contingent for next year’s Olympics in Rio de Janeiro.

The eight teams that will be competing next January 4-9 at Baskent Volleyball Hall in Ankara are Turkey as hosts of the Continental Olympic Qualification Tournament plus seven more as per the latest European Ranking, i.e. Russia , Italy, Germany , The Netherlands, Belgium, Poland and Croatia.

The respective National Federations are now due to confirm their team’s participation in the Continental Olympic Qualification Tournament by this coming Friday, October 9. After this preliminary step, the composition of the two preliminary pools of four teams each will be announced.

The eventual winners of the Olympic qualifier in Ankara will book their ticket to Rio 2016 whilst the runners-up and the third-placed team will continue to chase their Olympic dream at the World Olympic Qualification Tournament which is due to follow in May / June 2016 and will be taking place in Japan.