Colorado Springs, USA, December 23, 2011 – USA Volleyball announced on Friday that the U.S. Women's National Volleyball Team had been selected as its Indoor Team of the Year. The category includes senior, junior and club levels for both genders. 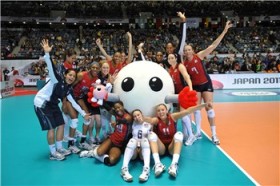 The U.S. women finished the season with a 39-10 record and qualified for the 2012 Olympic Games by finishing second at the FIVB World Cup. Team USA earned five podium finishes in six tournaments with two gold medals, one silver medal and two bronze medals.

“Every day we try to honour and respect the privilege of representing our country, and it’s nice to have those efforts recognized.”

The U.S. women claimed the gold medal in the 2011 FIVB World Grand Prix in August. Destinee Hooker was named the Most Valuable Player of that tournament and the FIVB announced that she had been selected as an FIVB Hero in its international campaign to bring added awareness to the sport.

At the FIVB World Cup in Japan, the U.S. women fulfilled their No. 1 goal of the 2011 season by earning qualification into the 2012 Olympic Games when they finished with the silver medal. Needing a 3-0 or 3-1 victory in its final match against Japan to secure its first-ever World Cup gold medal, the U.S. was unable to clear the final hurdle as they were beaten 3-0 by Japan.  Hooker was named Best Spiker of the tournament with a 49.53 kill percent.

Brazil: Brazil Federation of Volleyball to launch Men’s Superliga B