Brazil: Brazil Federation of Volleyball to launch Men’s Superliga B

Rio de Janeiro, December 23, 2011 – The Brazilian Federation of Volleyball (CBV) will launch the first edition of the Men´s Superliga B in 2012. 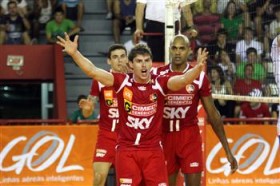 Superliga B should boost the men’s competition in Brazil

In total, eight teams will start fighting for the title in January. The competition will run parallel to the first division and the champions will qualify for Superliga A in the 2012/13 season. The CBV hopes the move will provide the league with better competition and expand its geographical range.

Six Brazilian states will dispute Superliga B. São Paulo will have three teams: Funvic/Midiafone from Pindamonhangaba, Santo André and Climed/Atibaia. The other teams will be Morro da Fumaça (SC), Sport Clube do Recife (PE), UFC/Ceará (CE), APAV/Canoas (RS) and Clube do Remo (PA).

The teams will be divided in two groups.

Group A will consist of Funvic/Midiafone, Morro da Fumaça, Sport Clube do Recife and UFC/Ceará.
Santo André, Climed/Atibaia, APAV/Canoas and Clube do Remo will make up Group B.

“The creation of Superliga B makes the Brazilian Championship stronger,” Renato D´Avila, Technical Director of CBV, stated. “The competition for a place in Superliga A will be intense. With this format, we will have better balance and it will make the championship even more significant. Next season, the intention is also to have a women’s competition.”

At the end of the first phase, the two top teams in each group will qualify for the semifinals – which will be the best out of three matches – and the winners will go to the final.

The points system will be the same as for Superliga A. From this season, the Superliga will follow the FIVB system. Victories by a margin of 3-0 or 3-1 will be worth three points, while teams losing by that score won’t pick up any points. Teams that win 3-2 will receive two points and the loser one.