Three-time defending champions Trinidad & Tobago, will come up against five other teams when the 14th Senior Women’s Caribbean Zonal Volleyball Association Championship (CAZOVA) serves off on Tuesday at in St Croix, US Virgin Islands until Sunday. 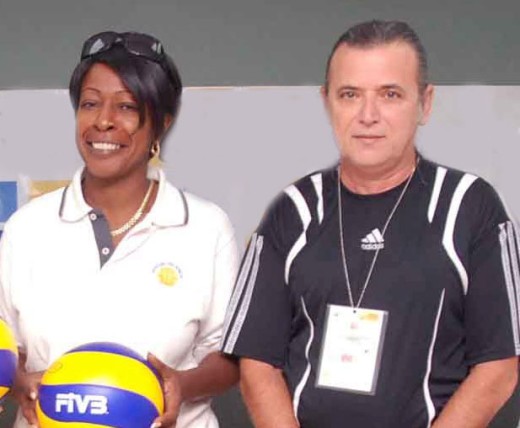 Speaking prior to the Technical Meeting the coaches of the six participating teams all expressed their views and objectives for the tournament.

Devince Smith (Bahamas): “We have won the women’s title twice in the past, the last was about ten years ago and since then we have been rebuilding both our national teams. This current squad has about seven senior players and our expectation is to be among the medals. As a team we feel it’s time to get back on the women’s medal rostrum. We have won two gold, two silvers and a bronze in the tenure of the women’s competition and we have every intention of adding to the medal haul this year.”

Andrew Brathwaite (Barbados): “Our preparations went reasonably well but my major concern is that we have not played as a national team in an international competition since the last CVC in 2010 in Suriname. To cover for that we have played some matches against some men’s team to keep the players sharp and the team has gel well during the phase. Our target is to get to the final even though we have a mixed team of youth and experience.”

Delag Jean-Louis (Guadeloupe): “The last we participated in this competition was in 2006 so we don’t have any idea of what to expect from the other teams as we don’t know what level they are playing at. “As a team we have a good group of experienced players together with some young players and we will try to do our best as we are working on a plan of being among the top teams in the region in four years time.”

Gatasheu Bonner (Jamaica): “We have been preparing for this competition over three months now with a good mixture of young emerging talent and experienced players. At the moment our main focus for this current group is on development but at the same time I believe we have a team good enough to compete and go all the way to the final once they play to their potential.”

Cuban-born Francisco Cruz (Trinidad & Tobago): “We have no other option,” he stressed. “Our one goal is to retain our crown as this tournament only allows the winner to qualify to compete at the NORCECA level. As a team we have to win tournaments like this to get the exposure at the next level because we want to qualify for the World Championships in 2014 and all the girls are very focused on the job at hand.”

Lucille Hobson (USVI): “Our main objective is to win the entire tournament. Our preparation has not gone all too well because our players are split between St Thomas and St Croix Islands, but despite those challenges we are targeting the crown. No disrespect to the other teams but our main focus will be on team T&T as a major threat. They are the reigning champs and we will be happy to take the title from their grasps.”

BUL M: Bulgaria is on the hunt for miracles

RUS W: Sokolova likes the food in the Olympic Village