BUL M: Bulgaria is on the hunt for miracles

The Bulgarian National team, considered one of the main contenders to fight for the medals in the Games will now be filled with the spirit of De Coubertin: "The important thing is to participate." 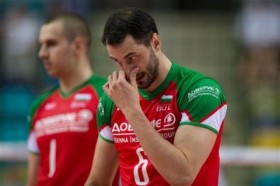 Bulgaria will play without Matey Kaziyski

“The real aim of our group is to be between the fifth and eighth place. We should have much luck to fight for a medal “Vladimir Nikolov said before leaving the airport in Sofia.

Nikolov, Todor Aleksiev and Teodor Salparov are three players who have already participated in the Games. For the rest, the Bulgarian team is full of newcomers.

The reason for this distortion is within the Bulgarian Federation.

The scandal has taken away when the leaders of the movement have criticized the coach Radostin Stoytchev immediately after the Olympic qualifying tournament played in Sofia and won by Italy. The federal president Dancho Lazarov had in fact accused the coach of deliberately losing against Germany to favor Italy, a country where he works. A phrase that has left its mark in the relations between the parties with the resignation of coach, but then a few hours later, the same federation asked the engineer to reverse his decision. “The team will train for the second Olympic qualifying tournament” the coach of Trent said. “But if you want me to go to London, Lazarov and federation leaders should resign.“

Stoytchev resigns, then the best player Matey Kazyisky also leaves the national team as Andrey Zhekov. Nayden Naydenov takes over on the bench in his first experience as a coach. Young twins Valentin and Georgi Bratoev (25 years) take place of Kazyiski and Zhekov.