RUS W: Sokolova likes the food in the Olympic Village

Russian team arrived to London, and immediately settled in the Village. 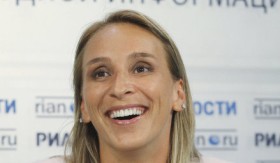 “We arrived today, passed all controls quickly, we were just hungry. We ate and returned to our rooms. If we talk about food, there is a variety here. It’s high quality food” Sokolova said.

According to the volleyball players, the whole team arrived to London “with a fighting spirit, with enthusiasm.” “As they say, we shall fight for the country and for our families” she added.

Russian volleyball players will not take part in the ceremony, as on July 28, the day after the ceremony, they will play against the team of Great Britain.

“We’re not going, because we have a game on the first day. We never go to the opening. At this time, it will be no different” she specified.

Tatiana Kosheleva has fully recovered from her injury and trains along with everyone. “Tanya performs a full range of training process, trains under the general program with the whole team, her state of health has improved. I think that it will improve each day” the volleyball player said.

Sokolova admitted that she had never been to London, and told what she had always associated to the city. “I Associated London with the sights – museums, with Big Ben, with two-storeyed buses, and funny police” she said.

London Olympics will be held from July 27th to August 12th.