Safia Boukhima, 21, represents the “nouvelle vague” of Algeria national team that will celebrate here in London its second Olympic appearance. The group will actually open the women’s tournament on Saturday by playing Japan and Boukhima is very much likely to be included in the starting six of the African team. 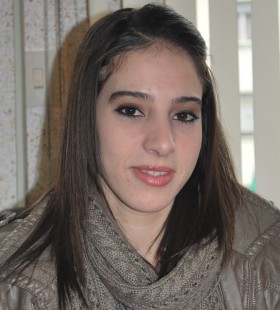 With team captain Fatma Zohra Oukazi – unanimously considered Africa’s best volleyball player – missing the Olympics due to injury and Faiza Tsabet having retired from competitive sport, Boukhima will be the one to watch out for as the Algerian squad around FIVB hero Lydia Oulmou embarks on a quest to perform well at Earls Court.

A talented wing spiker, Boukhima participated in the Beijing Olympics four years ago as a seventeen-year old; this past February she turned into the most prolific scorer for Algeria along the way to an Olympic berth that was claimed by winning the Continental qualifier held in Blida.

Standing at 176 cm, in spite of her age she has already collected 80 caps with the national team after taking up the sport under the guidance of Djamel Cheurfa at ASW Bejaia. Safia is much more than an outstanding volleyball player as she is fully dedicated also to her academic career. She enrolled at the University of Bouzareah this past December with the goal to graduate in Spanish language but first she will be carrying the hopes of Algeria’s volleyball family here in London.

Being able to combine professional sport with her studies, something that not everyone is really capable of, Boukhima will be a good reference here in London also for a few more up-and-coming stars included in Algeria’s national team, e.g. Celia Bourihane (17), the captain of the youth national team Sarra Belhocine and 18-year old Marwa Achour.

“The Olympic Games are the dream of any sportsman and sportswoman” says Safia, “and I am lucky enough to celebrate my second Olympic appearance in London. We hope to be able to perform well even though our team is significantly sidelined by the absence of some players that are regularly included in the starting six. I also have to express my gratitude to the public authorities for the support they have showed as we were getting ready for this unique adventure”.

After playing Japan on Saturday, Algeria will continue its Olympic campaign by taking on the hosts of Great Britain, 2010 world champions Russia, and 2011 FIVB World Cup winner Italy before rounding out the prelims by testing out the likes of the Dominican Republic.

Algeria will try to improve in London its record from the Beijing Olympics where the African champions lost all of their matches, taking only one set from the game against Kazakhstan.