Albania: Studenti tops standings of national league after first half of regular season

Tirana, Albania, December 25, 2011. The first phase of Albania men’s national league was completed right before Christmas after 10 rounds of play. 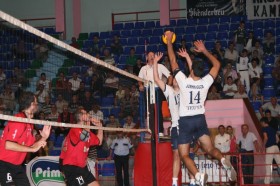 Studenti TIRANA, the runner-ups from the past season, have finished atop of the standings with 24 points while last year’s champions Teuta are ranked second and Tirana rounds out the top three.

This first section of the national league did not have any dominant force as even the top-ranked side suffered two defeats.

Studenti clipped a total of 24 points from 10 rounds of action winning 8 games and losing only two.

Quite many matches have ended in a 3:2, so Teuta is ranked second even though this side has scored only 6 wins, one less than Tirana and Vllaznia that have finished in third and fourth place.

These four teams are already qualified for the Playoff phase while Skenderbeu and Elbasani seem already out of contention for the final crown as their win/loss record currently stands at 2:8 and 0:10 respectively.

The second half of the regular season will start in February after completion of the national cup.

The calendar of the men’s league was slightly revised as next May Albania’s national team will play home and away matches for the first round of the 2013 CEV Volleyball European Championship against Great Britain.

As for the women’s national league the first half of the regular season will be completed this coming December 28 with a last round of play before the New Year’s Eve.