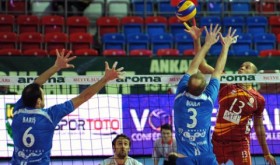 As Maliye having brilliant combinations, host made many simple mistakes 6:10, then Galatasaray improved block skills to come closer 13:14 Ankara staff called a time out, but it did not work 18:17, second one was not late. Although Erhan Dunge’s block brought 23:21, Ankara team even up 23:23 in a short time as Cimbom request second time out. Both sides had unforced service errors, yellow red boys powered a triple wall on the net 26:24 at the end.

Men in blue shirts were the faster in second set 4:8 especially Nikola Gjorgiev’s service round, Galatasaray YK balanced game via setter Ulas Kiyak and opposite Kemal Elgaz 10:10, moreover, kept the pressure on rival to 16:14, Elgaz continued aces up to 20:15, remainder for Cimbom was not hard to complete, set over 25:18. 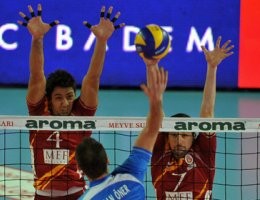 Galatasaray called an early time out 0:3 as a result of two consecutive attack error, nevertheles this break could not stop Maliye MP arrived first mandatory stop 3:8. Due to Ankara staff played so quick, they managed to save the gap 11:16 at the second break. Home team was losing morale condition while Maliye MP rising 13:20, so that, they seized set 18:25.

Galatasaray set a pace via Cuban player Salvador Hidalgo’s thunder services 9:6 until guests stopped the game, even they spent the second one at 14:9, this was not the solution, Cimbom arrived second break 16:10. Host increased tempo in the last part of the set via strong services, followed by opponent’s reception errors, finally Galatasaray YK won the game 3-1 having last set 25:14. 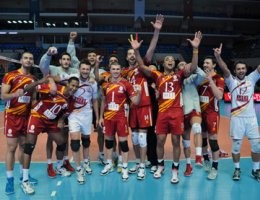 Italy: Christmas day on the road

Albania: Studenti tops standings of national league after first half of regular season

TUR M: Fenerbahce is out of the...