SKN W: Confidence and anxiety run high on the eve of Qualifier

The majority of the teams participating in 2014 FIVB world championship qualification women Round I Group D exuded an air of confidence on the eve of the tournament. 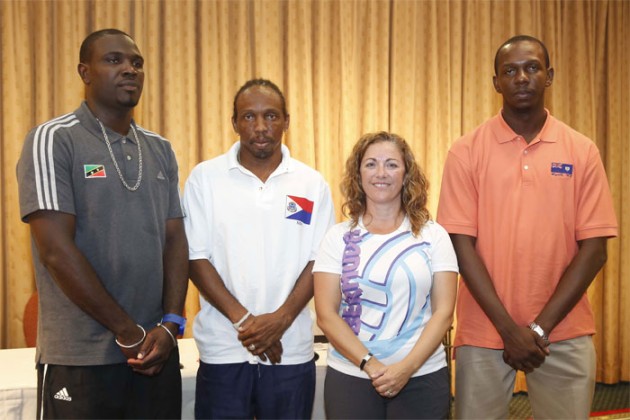 Coach Steadroy Collins of team St. Kitts/Nevis averred that they would deliver on a promise to win the group.

“The ladies are confident I wouldn’t say super confident but very confident that we can win this tournament. Instead of training the team had a special gathering and I was able to judge their state of readiness, so I think we will are ready both mentally and physically”, he said.

Team Anguilla reported that they were rather excited to participate and suggested that they have the resources to win the group as well.

“We are very confident will be able to put on a very good showing, actually our goal is to win it all and I think with have to resources to pull it off,” said coach Jason Liburd.

Cleofus Arrindell the head Coach of St. Maarten was not very upbeat about winning overall. “We are in a rebuilding phase basically our squad is made up of junior players with the exception of the captain” he said.

Team Bermuda suggested that they were more eager to prove that their development programme is making strides rather than winning and qualifying.

“We are very pleased to note that 70 % of our squad is Bermudan and have come out from a development programme that have progressed to a stage where the girls can now play in an international tournament,” revealed coach Juanita Blee of Bermuda.

OG W: “This was the highlight of my career” says GB captain Lynne Beattie