Montevideo is all set to host the sand battles in Group F of the women’s South American Beach Volleyball Continental Cup from Friday through Sunday with the participation of the national selections of Bolivia, Colombia, Guyana, Paraguay and host country Uruguay. 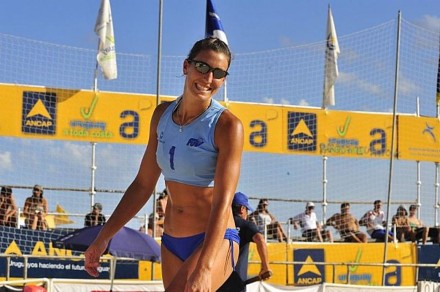 For three of the teams this tournament from the second phase of the competition will pave the way to joining Argentina, Chile and Venezuela in the third and final phase next year, which in turn will serve as a stepping stone towards the Rio de Janeiro 2016 Olympic Games.

One of the anticipated highlights of the upcoming tournament in Montevideo is the return of Lucia Guigou, one of Uruguay’s best players, to the national beach volleyball team.

“I am very happy to be back,” she says. “I left at a time when I was very tired and, honestly, I never expected to see the girls play at the World Championship and at the Pan American Games.  So when I was called, the decision was not so difficult.  I thought I could lend a hand and here I am, waiting for the weekend.  It is a barbaric group, but the top three go to the next stage and that is our goal.  Anyway, we will do our best to rank first. It is divine to play at home. I do not know how many people will come to support us; hopefully a lot!  Back in 2012, when we played with Venezuela in Pocitos, we had a great crowd of fans and it helped. Hopefully this will happen again.”

The five national squads, consisting of two duos each, will play each other in a single round robin format at the Arenas del Plata in upscale Pocitos.  Each country-vs-country matchup will be played in a best-of-five games format, with a single golden set to 15 points as the tie-breaker.

The games will be streamed live on the CSV website voleysur.org and here is the trailer: