Bulgaria beat Great Britain in straight sets (25-18, 25-20, 26-24) in match that opened the men’s Olympic tournament at Earls Court on Sunday morning. This was the first time in history these sides were crossing their ways and even though the home heroes were cheered by a massive crowd, still they could not crown their Olympic debut with a victory. Todor Skrimov and Vladimir Nikolov piled up 14 points apiece for Bulgaria while Mark Plotyczer set the pace for Team GB with 16. Bulgaria played with more consistency in all fundamentals, registering 13 blocks and 4 aces vs. 6 and 2 for the Britons. 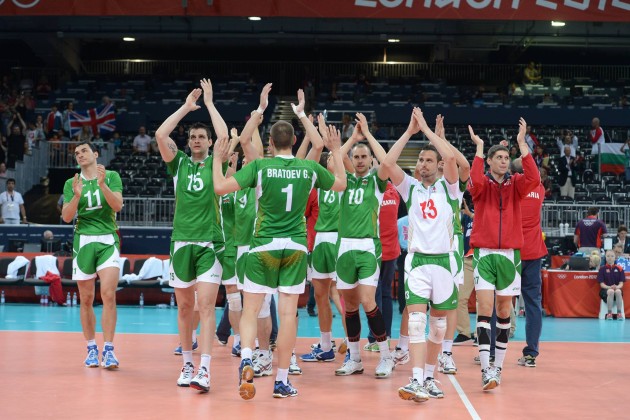 Great Britain made a strong start in the first set in front of an excited home crowd, with Mark Plotyczer grounding four spikes and killing two blocks as they matched Bulgaria. Oluwadamilola Bakare also looked dangerous but Bulgaria took charge midway through the set, as Todor Aleksiev, Nikolay Nikolov, Todor Skrimov and Vladimir Nikolov proved too powerful for Great Britain’s defence, going for the final 25-18.

The second set followed a similar pattern with Bakare, Nathan French and intelligent captain Ben Pipes keeping their team in the match. Bulgaria’s blocking countered many of their attacks, with Nikolay Nikolov, Skrimov and Vladimir Nikolov again leading the scoring. Viktor Yosifov also spiked well as they pulled ahead and won the set 25-20.

The third set saw the Earls Court crowd get excited as the home side took a five-point lead at 13-8. Bulgaria made too many mistakes while Bakare, Pipes, Mark McGivern and Plotyczer hit excellent winners. Scoring through their key players, Bulgaria drew level at 15-15 and the teams traded points all the way to 24-24. Despite the wild atmosphere, Bulgaria took the last two points to win 26-24 and close out the game in straight sets.

Bulgaria go on to meet Poland in the second round of preliminary matches on Tuesday, July 31. Great Britain, ranked No.92 in the world, can take heart from playing so well against an international power and will target Australia for their first ever Olympic Games win on that same day.