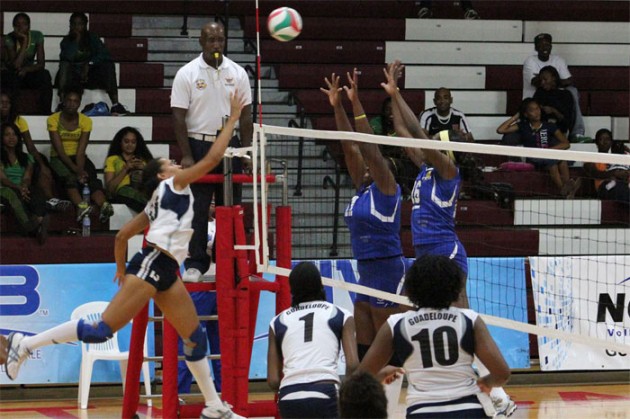 T&T captain Krystle Esdelle led from the front with 14 points. In addition to Esdelle, Kelly–Anne Billingy chipped in with nine points, and Sinead Jack and Channon Thompson, eight points each for the winners who dominated on blocks and service aces, 10-5 and 15-5 respectively.

Esdelle first congratulated USVI on a well fought match but was quick to point out her team made too many errors early on which allowed the opponents to stay in the match.

“Maybe we were too confident or something, but we did not press home our advantage early on but in the ending we stepped up our game with our blocking, passing and attacks,” she said.

T&T and Barbados, which last met in the 2008 final will battle for gold from 4pm on Sunday, two hours after USVI meets Jamaica for bronze in a replay of their quarterfinal match which the host won in five sets on Friday night.

Six-time champions, Barbados booked a spot in the final of the 14th Senior Women’s CAZOVA Championship after sweeping past Jamaica in straight sets (25-17, 25-20, 25-15) in just 70 minutes on Saturday night.

The Barbadians were led by the experienced duo of Shari Matthews and Anica Wood with 17 and ten points respectively. For the Jamaicans, who held an 8-7 edge on blocks but were outscored 3-10 on service Aces, Lecia Brown had eight points and Tracy-Ann Findlay got seven.

Thonya Joseph, the Barbadian captain praised her team for sticking to its game plan and executing too precision. “Our all-round game was good tonight. We were passing, serving, attacking and defending well as a team.”

Andrew Brathwaite, Barbados said his players knew going into the match it was not going to be easy and needed to execute to get the win, so congrats to my team for sticking to the plan by targeting their weaknesses which we had identified.

Winners’ Captain Isabelle Acina was the lone player in double-digits scoring in the match with 16 while her team-mates Yannick ferback got nine and the trio of Ornella Martol, Natacha Clairville and Amandine Mauricette, eight points each. Katrina Lightbourn had a team-high seven points for Bahamas while captain Krystel Rolle got six and Shantia Mc Phee, five.

OG W: Kim unstoppable in triumph of Korea over Serbia