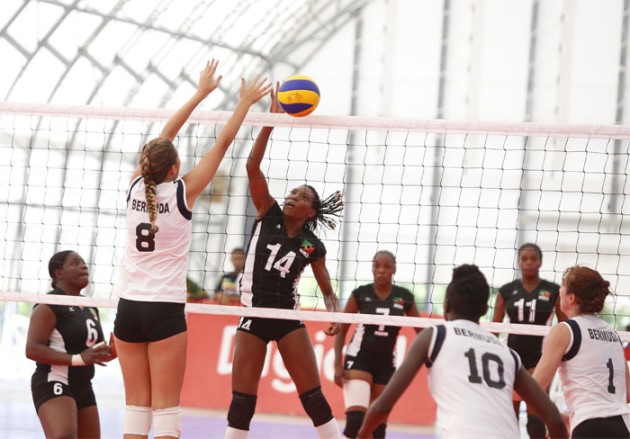 Shanicia Dyer of St. Kitts /Nevis had another superb performance with 11 spikes, 8 blocks and 2 service winners to end with a grand total of 21 points. Brenda Allen– Endinborough had 13 points and Captain Henry and Andrea Liburd contributed 11 each to give a concerted team effort. For Bermuda only their captain Victoria Stevenson had a double digit score of 10 points.

St. Kitts Nevis remained undefeated and confirmed a berth in the finals to play for the gold medal. The win did not come as a surprise to Coach Steadroy Collins.

“As I said before I am pretty confident that my girls will do well as long as they stick to the game plan. They had execution all around with only a few lapses in the third set,” he said.

Captain Antoinette Henry who was nursing a slight injury at the end felt too that St. Kitts Nevis played a great game. “We started slowly as usual and picked up momentum going right through the three sets. It was only when we got to match point in the third set that we lost mental focus”, she admitted.

Bermuda Coach Juanita Blee was satisfied despite the loss. “I think St. Kitts/Nevis and Anguilla deserve to go to the finals as they were the better teams here. However I am proud of the way the young girls played, they made some errors but they did not allow those errors to discourage them. We will now look forward to the third place play off and hope to win it as a great motivation for the young ladies,” she concluded.