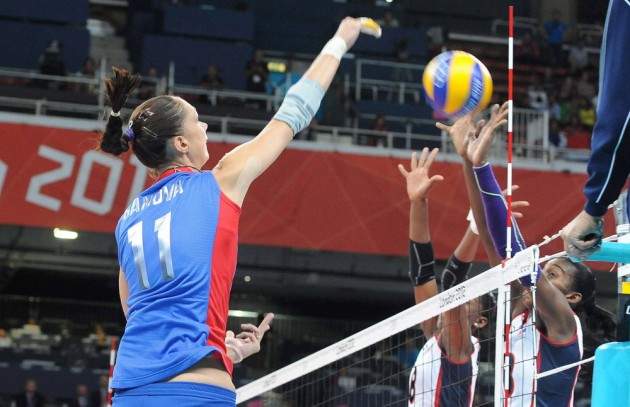 It was the second triumph for the Russian team while Dominican Republic, currently ranked No. 11, suffered their second loss.

Veteran Ekaterina Gamova led the winning side with 22 points, including a match-high six blocks. Nataliya Gonchareva added 14 while Maria Perepelkina and Maria Borisenko each registered four blocks to go with 12 and 9 points respectively.

Dominican Bethania De la Cruz topped all the scores with 26 points, including three blocks and two aces, and teammates Candida Arias and Milagros Cabral finished with 17 and 16.

The first set was close all the way through, with Russia‘s key player Ekaterina Gamova and Nataliya Goncharova scoring spikes early, while Candida Arias Bethania De la Cruz hit back for the Dominican Republic. Despite a contrast of styles – Russia‘s power against the Dominican‘s speed and trickery – the two sides were only a point apart for most of the match. It went to 22-22, but Russia managed to take the crucial final points, winning the set 25-23.

The second set started evenly. Gamova and Goncharova scored well for Russia, while Arias and De la Cruz did the same for the Dominicans. Brilliant libero Brenda Castillo performed several miraculous digs for her side and Sidarka Nuñez added to the spiking tally. But Russia‘s precise play was the deciding factor. After two sets they had made just two errors, compared with the Dominican Republic‘s 15. The set ended 25-15 to Russia.

In the third set, as the teams traded points, Cabral performed well for the Dominican Republic and Castillo’s incredible digging kept their defence strong. Gamova was commanding for Russia, and the sides tied at 17-17 and 23-23. As the excitement mounted, Dominican Republic saved a match point, and then won two points themselves to take the set 26-24.

In the fourth set there once again nothing to separate the sides. But Russia moved ahead mid-set to get a 20-16 lead as Gamova led her team in both spiking and blocking. The Dominicans battled back to within a point at 23-22, but Russia grabbed the final two points to end a tough game, winning the set 25-23. Gamova’s 22 points were crucial, although De la Cruz was the top scorer in the match with 26.

Unbeaten Russia play Algeria in the third round of preliminary matches on Wednesday. The Dominican Republic have lost their first two matches and will hope to improve against Japan.