Tauron MKS DABROWA GORNICZA is getting ready for a very demanding season as the club from southern Poland is set to compete in the national league and Cup as well as in the CEV Volleyball Champions League. The team qualified for Europe’s most elitist competition by claiming the last edition of Poland’s national cup and eventually ended up in third place in the national league, the best result in history since the club was founded back in 1992. 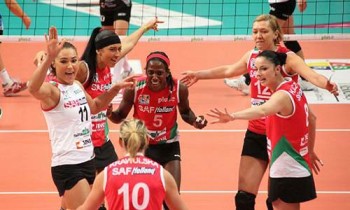 With these outstanding results Tauron MKS could celebrate a splendid anniversary but still this won’t be the debut of DABROWA GORNICZA in the CEV Volleyball Champions League. Some three years ago the club had joined this league under the denomination Enion Energia DABROWA GORNICZA playing a series of tough opponents in the prelims, i.e. Scavolini PESARO of Italy, Turkey’s VakifGunesTTelekom ISTANBUL and ASPTT MULHOUSE of France.

After a series of good performances, Tauron MKS advanced to the Playoffs 12 but lost there twice to Asystel NOVARA of Italy, still accumulating valuable experience on the European scene.

The players of Tauron MKS are already working hard for the start of the 2012/2013 season. “For the first days we won’t be playing Volleyball but will rather do some other exercises in the gym. We are going to play for some time also on the beach, something which is good for our fitness and conditioning” says middle blocker Ivana Plchotova.

The supporters and local people in Dabrowa Gornicza have already started the countdown for the first home match in the Champions League. “Our attitude is very combative and we have to start our matches aggressively. Only if we stick to this plan our participation will make sense” concludes Elzbieta Skowronska.

ITA M: A top-scorer for Ortona

ENEA CUP: Zaksa against all odds!