OG W: Third day of women’s action could be pivotal for some teams

The third competition day of the Olympic Games women’s volleyball tournament could prove to be a turning point for some of the teams facing crucial matches with the results eventually affecting their London expectations. 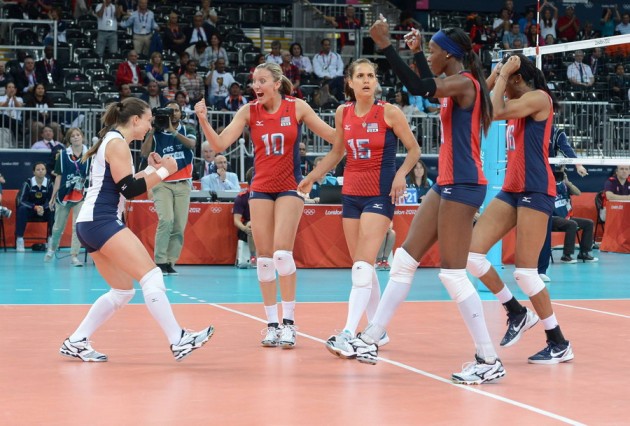 The reigning atmosphere in Earls Court, both in the playing court and in the stands, could not be more appropriate to host the volleyball competitions, with capacity crowds enjoying every bit of the action and the players giving their maximum effort for the sake of their sides.

Wednesday’s schedule features an early important match between Dominican Republic and Japan followed by Algeria against Russia. The afternoon session presents one key contest of Serbia versus Turkey before Great Britain face off Italy, with the main dish reserved for the evening program when United States clash with China and Brazil meet Korea.

Japan leads the head-to-head series with a wide 10-2 margin having won the last four contests between these two sides. The second and last time Dominican Republic defeated Japan was at the 2009 World Grand Champions Cup when they claimed the bronze medal. After cruising against Algeria in their first outing, the Japanese battled hard before going down against Italy in four sets. The Dominicans had a very difficult schedule playing Italy and Russia in their first two matches but despite the two losses they showed glimpses of what they can do against opponents with a little less firepower. After a subpar performance in the first match, Bethania De La Cruz came back with a 26-point game against Russia.

The only time these two teams saw each other was during the pool play of the 2008 Beijing Olympic Games with a victory in favor of Russia. Chances are very high that the European side will continue improving their record head-to-head record while the African side will get a valuable experience of playing such powerhouse. Big Ekaterina Gamova was in full swing while scoring 22 points as a key factor in the victory over Dominican Republic with her booming spikes over the opponents’ blocking. Algeria relinquished a 2-1 lead against hosts Great Britain in Monday’s nightcap when they committed 42 unforced errors for the whole match.

The early going of the volleyball tournament has not been like a day at the beach for these powerful European teams with both empty-handed after two days of action. In the very competitive Pool B, it is almost a do-or-die match for both sides. The Serbians lost to China and Korea in four-set affairs while the Turkish were able to catch one point from their 3-2 lost to defending Olympic champions Brazil in day one before succumbing to the unbeaten China on Monday. A series of injuries have left Serbia’s coach Zoran Terzic with short room in which to maneuver and that is a factor that could have its effects in the team’s performance. The sides have twice played each other with Turkey coming out winners in both occasions.

The British team led by their captain Lynne Beattie, are still fresh off their historic first volleyball Olympic victory when they prevailed in five-sets against Algeria. Now it is time to step off cloud nine and come back to earth to face reality in the form of world cup champions Italy, one of four undefeated teams in the tournament. The Italian trio of Simona Gioli, Carolina Costagrande and Antonella Del Core is as good as they come and the skilled setter Eleonora Lo Bianco is hard to emulate. Nevertheless, in the well disputed match against Japan, the veteran Francesca Piccinini was prompted into action to score the last two points of the match, which tells a lot about the depth of the Italian side.

Top world-ranked United States downed defending champions and world No. 2 Brazil in their previous match and now they are facing the no less difficult hurdle of playing No. 3 and undefeated China. The books present China exhibiting an overall 32-21 win-loss advantage in the contests disputed by the two giants, but history also tells the last Asian victory against the Americans occurred during the preliminary phase of the 2007 World Grand Prix. Since then, USA  have won seven times in a row, including a 3-0 win in the Finals of this year’s WGP. The tandem of Destinee Hooker and Jordan Larson has been on fire during the two victories against Korea and Brazil with Hooker totaling 44 points and Larson contributing 34. China team have regrouped and are rated as solid medal candidates, especially with Yimei Wang healthy again.

Defending champions Brazil are in need of a wake-up call after a sleepy start in their campaign to validate the Olympic title. They first battled very hard to prevail in five sets against Turkey and lost two one-sided initial sets to USA before coming alive for a while in the third stage of their 3-1 loss. On the other hand, Korea emerged from their defeat to the hands of the Americans to punish Serbia carried on the back of a 34-point performance of superstar Kim Yeon-Koung, who leads the scoring charts with 63 points in two outings. History is in favor of the South American side as the Brazilians have won 33 of their 43 lifetime contests, including the last 13 and 30 out of 32. Korea won the first six meetings and last won back in 2003 World Grand Prix.

OG M: Brazil down Russia in straight sets to assert its credentials for Olympic gold