Australia won their first match of the London 2012 Olympic Games volleyball competition beating Great Britain in three straight sets (25-15, 25-18, and 25-20) in a preliminary round pool A match at Earls Court on Tuesday. 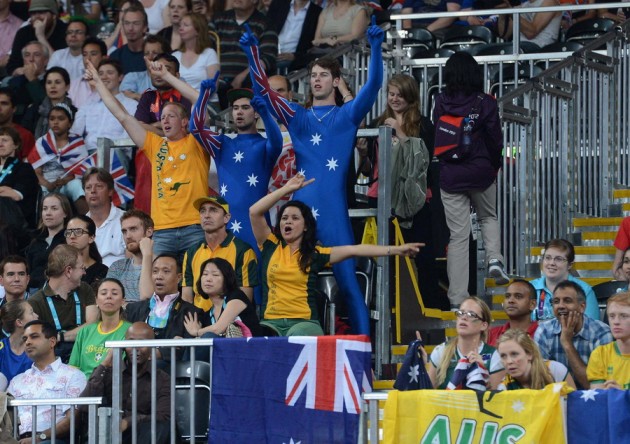 There are 70 world ranking places in between the two teams, and it showed. Britain committed error after error throughout the match – particularly on serve – making it very difficult for the home team to compete with their antipodean foes.

Great Britain got off to a slow start, and was forced to call a time-out with the score at 4-1 to Australia. Unfortunately for the home team, it made no difference as Australia continued pile on the points, going up 8-1 before Great Britain was forced to call another pause. Thankfully, for British members of the crowd, the home team was able to make something of a comeback to only drop the first set by 10 points, 25-15.
The second set began with neither team playing particularly well; however Australia was able to seek out a two point lead early. But, for the first time in the match, Great Britain was able to string multiple points together to briefly take the lead, until Australia cut out the errors to again pull away to win the set 25-18.
Great Britain kept fighting, but had no answers to the Australian onslaught in a final set that ended 25-20.

The most obvious area where the Australians dominated was in defense. The Australian blockers formed an impenetrable wall and Thomas Edgar lead the way with three. In total Australia blocked nine shots to Great Britain’s one. Edgar also led Australia in scoring with 13 points followed by Igor Yudin’s 10.
Great Britain’s players were their own worst enemy in this match, committing 32 errors to Australia’s 20. Their best was Mark McGivern who finished with seven points.

Both teams return to the court on Thursday, August 2. Australia will match up Bulgaria while Great Britain will take on Italy.

BEACH VOLLEYBALL: Alison to celebrate 30 with...