Japan dream to win an Olympic medal finally turned into reality in London as the duo formed by the “Saoris”, Kimura and Sakoda, played a superb classification match to edge Korea in straight sets (25-22, 26-24, and 25-21) to eventually claim bronze, the first medal for the nation that hosted the first volleyball Olympic events in 1964. The last time Japan had finished among the top three was in 1984 and since those days the quest for Olympic glory of the players from the “Land of the Rising Sun” had regularly resulted into a series of failures and major disappointments. 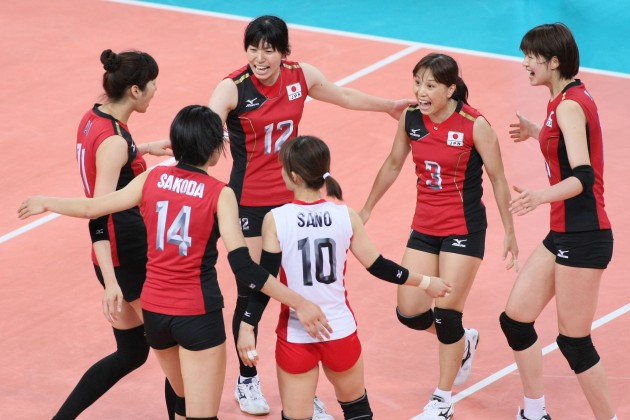 This medal actually pairs with the bronze this group had seized two years ago at the World Champs in Tokyo, but stands out as a unique way to support the popularity of the sport in a country that has been always fond of volleyball but had lacked top finishes for a couple of decades. Korean star Kim Yeon-Koung once again top scored for her side with 22 points but was eventually bested by Saori Sakoda who paced Japan offense with 23. Even though they failed to return to the Olympic podium for the first time since 1976, still Korea remain the major sensation of the tournament and with Kim being only 22 they will be a major force to reckon with also in four years by the time the Olympics will take place in Rio de Janeiro.

As these sides were both vying for their first medal in a few decades, Japan caught a flying start going quickly up 4-0 before Korean star Kim Yeon-Koung, the undisputed top scorer of the Olympic tournament with 185 points, could break the ice and claim the first point for the group coached by Kim Hyung-Sil. After winning the derby with their arch-rivals of China, Japan had failed to stretch that momentum to the semi-final against Brazil, while Korea had gone through a similar experience with Team USA after beating Italy in the 1/4 finals. After a long and physically demanding tournament, Japan and Korea needed to accelerate down the final stretch to finally bring it home with a medal that their respective volleyball families had been waiting since 1984 and 1976 respectively. Korea gradually found their way in the game but Japan still enjoyed a margin of three by the first technical time-out. A lucky service winner by Han Song-Yi reduced that gap to a minimum before Saori Sakoda responded for Japan with a splendid attack from the back row. Kim Yeon-Koung powered Korea to 9 all and her side eventually got to the front for the first time after a long rally – with incredible actions in defence contributed by both teams – ended with a mistake made by one of Japan’s middle blockers. Kim gradually started her personal show but the score remained very close as both teams were displaying their well-known excellence in defence thereby making it quite difficult for their opponent to score. The match gradually developed into a duel opposing Kim to Japan main star Saori Kimura – who is set to leave her home country after the Olympics to move to Europe and play for Vakifbank in Istanbul – and Japan finally claimed a very slim lead (21-19) while approaching the final rush of the opening set. Kim was immediately called up by her setter and captain Kim Sa-Nee to finalize the next rally and as Japan spiked off the court, the tie was there again at 21 all. Korea contested a decision of the first referee that eventually assigned the provisional 22-21 to Japan and another fault, this time for crossing the 3-m line while spiking from the back row, whistled to Kim, brought three set balls to the count of Nippon, with Sakoda cashing the second opportunity for the 1-0 (25-22).

Similarly to what had happened in the first set, Japan started out brilliantly (5-0) to the delight of the many fans that were waving the “Hinomaru” – Japan’s national emblem portraying the Rising Sun – after every single rally claimed by their heroines. Kim eventually stopped that negative streak for Korea but Japan played with great consistency in all fundamentals going up 8-1 by the first mandatory stop. All those who may think that modern volleyball is all about physicality were certainly impressed by the quality contributed by a team that was lining up two players – Takeshita and Sano – who stand at only 159 cm. Japan’s defence system was just amazing and even though Kim tried to take her side by the hand, she also could not surprise the Japanese receivers that often. After leading 16-11, the next two attacks of Team Japan were stopped by the Korean block and coach Masayoshi Manabe eventually had to seek refuge in a time-out but Kim prolonged Korea’s positive series with a superb pipe. With their lead reduced to only one point, Manabe quickly opted for another break and this time it brought the effect he was longing for, with Japan going up 18-15. By the time the deciding phases of the set were approaching, both teams evidently felt some tension and fatigue as they committed a few mistakes. However, Kim on one side of the net and Kimura on the other were still on a class of their own, but the MVP of the last Champions League finals was not able to compensate for the lack of consistency showed by her teammates, and Sakoda could pile up three set balls for Japan. The end was not yet there, as Korea fought back to 24 all before Sakoda spiked for the 25-24 and the 2-0 was ultimately sealed via a Korean error.

Korea had to embark on a very difficult mission to turn the tables around and had no other option than to go for it after Japan had raised the bar very high in the first two sets of this “consolation final”. Korea set the pace right from the start but Japan tied the score at 7. The heirs of the ladies who had claimed the first Olympic tournament back in 1964 wanted this medal so badly that they could pull away the disappointment resulting from their defeat in the semi-final with Brazil, flipping the score around and taking the lead for the first time at 14-13.

Korea lacked that killing instinct that was well needed in such circumstances but Japan – although splendidly marshalled by their pocket-setter Yoshie Takeshita and the spectacular libero Yuko Sano – probably started feeling some pressure as the finish line did not look that far away any longer. Two mistakes re-opened the door for Korea (19-19) but Sakoda got her side back on track with a magnificent attack from the back side of the court. At 23-20, Japan fans were getting ready for a party they had been waiting for 28 years and a block-out paved the way for four match balls… with Sakoda making the dream of a whole nation come true only a few moments later (25-21).