KOR M: Grozer and Co. victorious in their final test 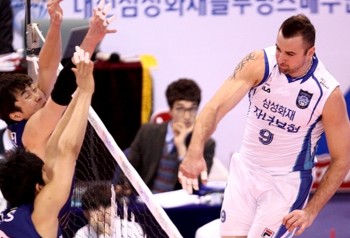 The game itself did not have any special meaning. Samsung Bluefangs have already secured their spot in the Playoffs Semi-Finals where they will face Rush & Cash. Still, it was important for them to pass the final test before the championship battle begins. Gyorgy Grozer and Co. outplayed KB Stars in 4 sets and made a good intro for the Playoffs.

Grozer had kind of a “slow day” for him. He was not spiking so many balls as usual, but he was still the top scorer of the game with 22 points.

To see standings and other results visit our Korean National Championship 2015/2016 M page.