Teams from nine countries will compete at the NORCECA Women’s U-20 Continental Championship in Managua from August 21-26. 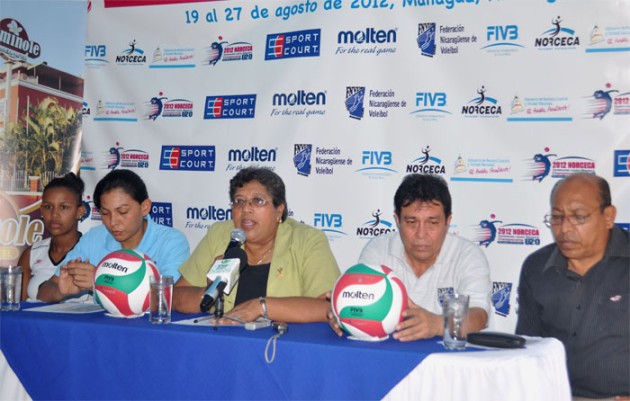 The medal winners of the competition are granted of spots in next year’s FIVB Women’s Junior World Championship to be held in Czech Republic.

United States and Dominican Republic have won the gold and silver medals respectively in the past four editions of the championship with USA winning the title in five of the total seven editions. Cuba and Puerto Rico won the other competitions.

For the first time a country from the Central American zone is hosting the event. Mexico was the site of the competition during the past three editions and four in total. The event once visited Cuba, Puerto Rico and Canada.

Bertha Cuadra, President of Nicaragua’s Volleyball National Federation appreciated the confidence shown by the Norceca Volleyball Confederation during a press conference held at the Seminole Hotel.

“This event will allow us to have national teams with athletes that in the future can become Olympic or world caliber players,” Cuadra said.

“NORCECA’s President, Mr. Cristóbal Marte, has always had a clear vision about development of volleyball in the Central American and Caribbean areas. Thus we have the participation of three countries from our zone and four from the Caribbean with the presence of Guatemala, Costa Rica and Nicaragua, as well as Cuba, Dominican Republic, Trinidad & Tobago and also Antigua & Barbuda”.

The other two teams that will complete this championship are USA and Mexico, two countries with aspirations of reaching the podium. Dominican Republic is the number 1 country in the NORCECA Ranking, followed by USA and Cuba.

Mexico is in the fourth place and Costa Rica in fifth. Antigua (ECVA), Trinidad & Tobago (CAZOVA), and Guatemala (AFECAVOL) are the zonal champions, and Nicaragua is the host team.

“Along with the vote of confidence of Norceca to organize this tournament, we have economic support for this challenge, because is a high investment, due to the lodging, gathering and internal transportation of the competing teams,” Cuadra added.

“We also have the support from the Government of Nicaragua which maintains its policy of support to all sports and responded to our request. They (government) are covering almost a 40 percent of the costs,” the president said.

The opening ceremony will take place also on Tuesday at 7:30 PM. All the diplomatic missions of the competing teams, as well as government and national sports officers have been invited.

The teams are distributed in three pools each of three teams. The two pool winners with the highest ranking will advance directly to the semifinals and the pool winner with the lowest ranking will compete in the quarterfinals against the second placed teams.

The pool distribution is as follows:

Mayor of Urmia about Marouf and Zenit:...