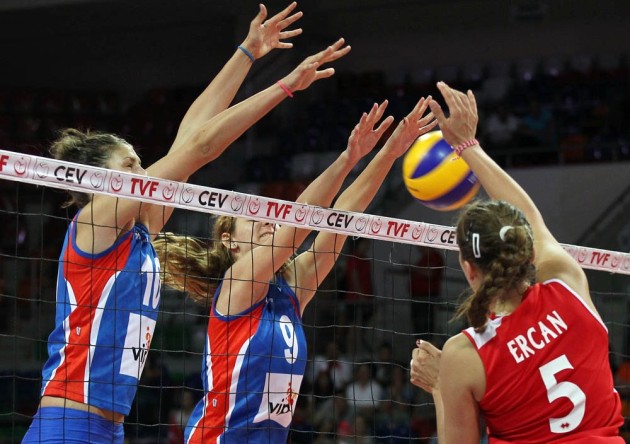 2010 runner-up Serbia crashed Turkey in tonight’s top match of Pool I 25-22, 25-19, 25-21 to finish first in their pool after five competition days. In front of 3’100 faithful fans at Baskent Hall in Ankara, the East Europeans proved too strong for their adversaries. After 81 minutes, Ece Hocaglu sent the ball out of bounds to conclude the eagerly-awaited duel in Serbia’s favor. Best scorer of the match was Serbia’s captain Bianka Busa with twelve kills, whilst Turkish captain Damla Cakiroglu booked nine units for her team. There was not much to separate the two teams in the beginning of the match. Both teams took some risk behind the service line (four mistakes each), but played solid at the net. Serbia led by two points at the second technical break. Some rallies later, Serbia’s captain Busa (seven points in the first set!) hammered the ball down to offer her teammates five set balls at 24-19. Turkey saved three with Asli Kalac and Seyma Ercan on fire, but another service error gave Serbia a hard-earned 1:0 set lead. The team of head coach Ratko Pavlicevic kept the upper hand in the second set, putting a lot of pressure on their challengers. From 14-14 to 19-14, the East Europeans scored five consecutive points, before the hosts fired back to reduce the gap to two units at 19-21. Nevertheless, the young Serbian ladies proved too strong for their rivals. Natasa Cikiriz brought up set ball at 24-19, and an offensive mistake on the Turkish side gave the Serbians a comfortable 2:0 lead. The story of the match didn’t change in the third set. Turkish head coach Gökhan Edman made several substitutions to reinforce his squad, but it was already too late. The promising Serbian talents never looked back (25-21), finishing the first part of their 2012 CEV Junior Volleyball European Championship – Women campaign impressively.

Serbia head coach Ratko Pavlicevic: “It was important for us to play a solid game tonight. In front of 3’100 fans, my players can learn a lot. Now we’ll relax a little bit to be ready for Saturday’s semifinal against a strong Italian team.”
Serbia captain Bianka Busa: “Congratulations to my teammates. Tonight’s match was an excellent preparation for Saturday’s semifinals versus Italy. We will be ready.”
Turkey head coach Gökhan Edman: “Serbia showed outstanding block-defense work tonight, congratulations. At the end of the match, I tried some options to prepare the semifinals.”
Turkey captain Damla Cakiroglu: “We are already focusing on Saturday’s semifinals. Serbia was a strong team tonight, they deserved to win.”

Two weeks before the men’s juniors will battle for medals in Denmark and Poland, Turkey is in the spotlight for the prominent CEV event at Baskent Hall that hosts Pool I and Ahmet Taner Kislali Hall featuring Pool II. A total of 38 matches are played during the tournament, running from August 18-26.