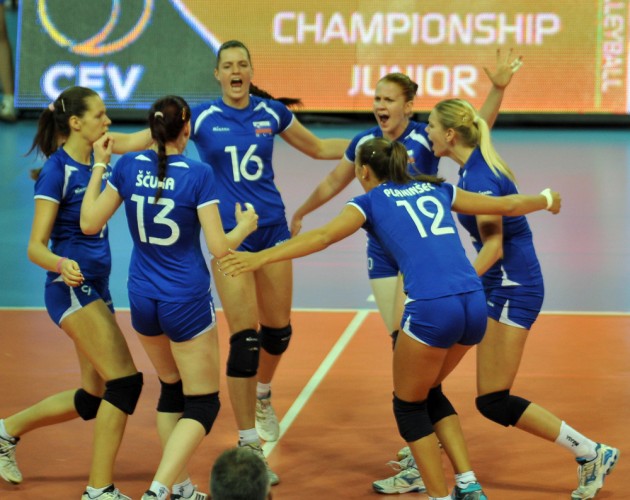 Opposite Iza Mlakar was the dominate player of the match with 22 points, scoring one winner from the service line, four blocks and 17 kills in attack. The main difference at the start of the match was the number of unforced errors. Whilst Slovenia committed eight, Belgium only had two. As a consequence, Belgium concluded the first set 25-21 in their favor. However, the Slovenian block-defense system started to work better in the second set, giving the Belgian spikers a hard time (14-25). As in their previous matches in Pool I, excellent moments alternated with blackouts on both sides. However, the East Europeans seemed to be more determined, particularly in attack and after the second period in passing too. The young Slovenian talents claimed set No. 3 25-19 and never looked back in the fourth and last period (25-15) to finish third in Pool I after the preliminary phase at 2012 CEV Junior Volleyball European Championship – Women.

Slovenia head coach Bruno Najdic: “Even when the race for the third place was not the key point today, it was still important to win. After a difficult first set, we served much better; that was one of the principal factors to win.”

Belgium head coach Julien van de Vyver: “We were planning to prepare well for Saturday’s game. However, the Slovenian team was much stronger in attack today.”