ECJ M: Bulgaria won the tie break and the match against Greece

In the last match of day two in pool II Bulgaria and Greece had to use all five sets to find a winner. 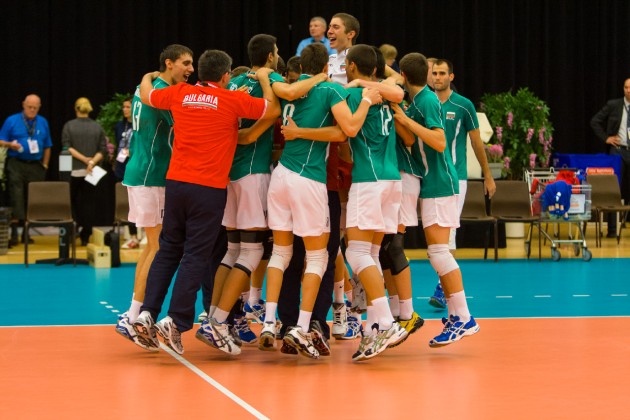 The second set was way more even than the first with Bulgaria in front 8:5 at the first technical time-out. The Bulgarian team was more focused in the set and had left the negative attitude from the first set at the side of the court. Though behind, Greece did not let Bulgaria get a scoring streak. Bulgaria was in front 16:13 by the second technical time-out and won the set 25-19 after a smash by wing-spiker Stanislav Velichkov.

The third set came off close as Greece was in front 8:7 by the first technical time-out. Greece made twice the amount of points as Bulgaria to the second technical timeout leading 16:11. Bulgaria showed good mental strength and was in front 20:19 before Greece leveled 20:20. A yellow card to Bulgarian setter Georgi Seganov gave Greece a 22:20 lead, but that only turned on an extra spark in the Bulgarian team who won the set 25-23.

The fourth set was a close encounter with only one point between the two teams at the two technical time-outs (8:7 and 15:16). The tight set continued to the very end with Greece winning it 25-23.
In the tie break the Bulgarian team showed the best mental strength in the beginning leading 8:5 when the teams changed sides. Close at 11:10 and 12:11 to Bulgaria and finally the heirs of the 2010 silver medalists from Bobruisk won the tiebreak 15-11adding two more points to the pool table.

A tired Bulgarian head coach was relieved to have won the match: “In the first set Greece served very strong. They did not make any mistake and then we got nervous. And instead of focusing and concentrating on clearing the balls, we just got even more nervous. From the second set we started playing as a team again. I told the players that I was expecting them to do what we had agreed before the match and play better. And happily for us they did. I think the team showed good mental strength. This is something we have developed in our training and it paid off today” said Miroslav Zhivkov.

WL M: Oranjes one step away from World League ticket

NORCECA W: Coaches are ready for the...