The FIVB Volleyball World Grand Prix 2016 Group 1 is set to begin on Thursday! WorldofVolley is presenting 12 teams that will compete in Group 1. 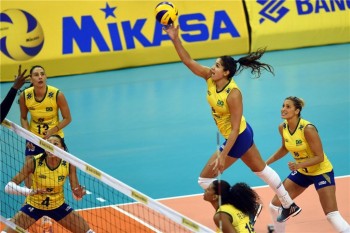 Brazil, Italy, Japan and Serbia will start their FIVB Volleyball World Grand Prix 2016 campaign with a mini-tournament marked as Pool B, that will be held in Rio de Janeiro, Brazil.

As this year they will be the hosts of the Olympic Games, Brazil will definitely put their entire focus on that tournament, but they will still be one of the main powers at the 2016 edition of FIVB Volleyball World Grand Prix.

Italy is one of the famous volleyball nations that still has no gold medal at the FIVB Volleyball World Grand Prix. They came so close back in 2004 and 2005, but in both occasions they finished tournament at the second place. This year, they once again have a very strong team that managed to qualify for the Olympic Games, so the Blue squad will be a very dangerous opponent for any team at the 2016 Grand Prix tournament.

Japan are one of only two teams, along with China, to have played in all 24 editions of the FIVB Volleyball World Grand Prix. They haven’t won the gold medal yet, but Japan do have one silver from the 2014 Grand Prix edition, when they were the hosts of the final tournament.

Serbia will make their 6th consecutive appearance at the FIVB Volleyball World Grand Prix. So far, they haven’t managed to win the competition, but they have two bronze medals from 2011 and 2013 editions. Serbia have won the silver medal at the last FIVB World Cup and have therefore qualified for the Olympic Games in Rio 2016.

PRELIMINARY ROUND / GROUP 1 / POOL B

Fenerbahce did not get just a setter… Nootsara can also play as outside-hitter! (VIDEO)