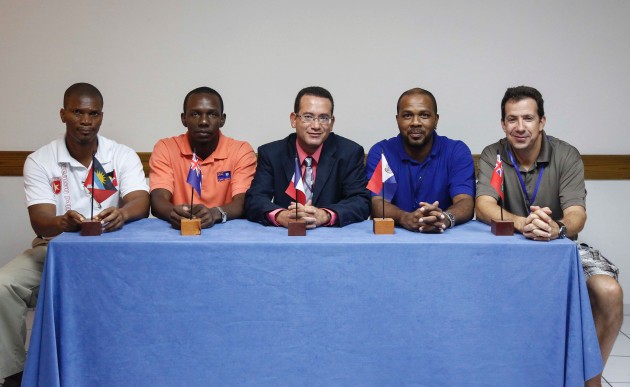 Most teams have indicated that the plan “A” is to win and plan “B” is if they don’t win then qualify for the next round.

The top three teams will advance to next year’s second round of the competition towards the quadrennial world event to take place in several cities of Poland in 2014.

Antigua are currently placed 18th in the NORCECA Rankings as of January 12 while Anguilla are positioned in the 24th position.

Bermuda’s coach Bill Bucci said that his team is chartering in new waters so he is threading cautiously.

“This is the second time that we are playing in a competition of this nature so we don’t know what to expect but we are hoping to be in the top three to qualify for the next round,” he noted.

After four months of solid training and external assistance from coaches from Brazil and Czech Republic, Antigua & Barbuda might have the material to win the zone.

Fitzroy Benjamin, coach of Antigua Barbuda, gave his views.  “We have played the two St. Maarten teams as well as Anguilla on numerous occasions, the only team that we have not really seen before is Bermuda but if we play our brand of volleyball we will not have to worry too much about the competition,” he said.

Anguilla’s coach Jason Liburd said that his team has learnt from mistakes made in the past.

“We have met  these teams several times before and felt that we could have beaten them and now we are at a stage where we feel that we have paid our dues, done our time and  this tournament is our turn to come out on top” he intimated.

Coach of St. Martin – Jean Luc Lizen was reserved in saying that his main objective was to qualify for the next event but his captain Quellery Paul had a slightly different view. “We expect a very competitive tournament because everyone has come here to win and we are no different from them,” he said.

Raymond Jacobs head coach of St. Maarten have sized up the competition and concluded that St. Maarten is in with a very good chance as well.

“We expect to pour in a good showing, we have played many of these teams before and what they bring to the table we can match,” he said in a confident tone.

This is the fifth first-round men’s event held within NORCECA this year. The previous ones were played in St Lucia, El Salvador, British Virgin Islands and Costa Rica.

ECJ M: Russia ended the hosts’ dreams of qualifying for the semis