Hunsel Sandrina had a match-high 22 points as host Suriname overcame the disappointment of missing out on the gold medal match by sweeping Bahamas in straight sets in the third place match of the 2014 FIVB World Volleyball Women's Norceca First Round Group A in Paramaribo on Sunday night. 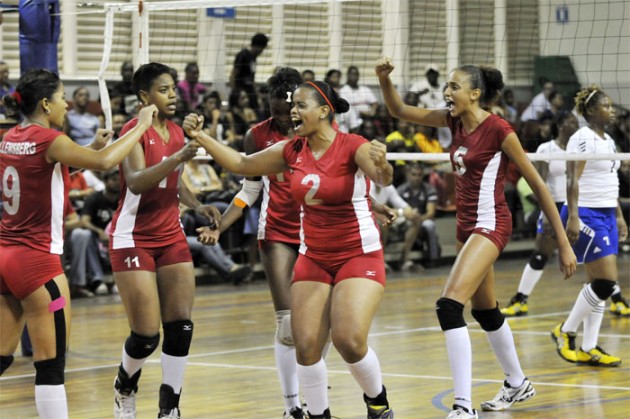 With the two finalists, Trinidad & Tobago and Guadeloupe already assured of passage to the second round of qualifiers next year, the battle was on for the third and final team to join them and in the end Suriname secured a 25-23, 25-19, 25-18 win in 71 minutes after trailing 20-23 in the first set to take the bronze medal.

Teenager, Kame Sigourney added ten points for Suriname which was without libero Pamela Gilds who left for studies in Holland earlier in the day while Xaviera Willemsberg and Chavelli Wip chipped in with five points each at the Ismay van Wilgen Sports Hall.

For the short-handed Bahamians, Cheryse Bain topscored with eight points, while captain Krystel Rolle and Tia Charlow got seven apiece.

Speaking after the match, Rolle said it was the same old story for her team as they did not pass and serve well, which is key to the game.

With regards squandering yet another set lead Rolle said: “We just could not finish the set. We had numerous chances but again the game centers on good passing, and if you don’t do that well it will be a problem.“

Suriname captain Cheryl Brunings pointed out that before the match she told her players winning the first set was a key to the match as it would set the tempo.

“We were behind but we fought hard and after winning the opening set the match became easier for us“, she said.

Bahamas coach lamented the fact that his team was short on enough bodies due to absent players and injuries and this made it difficult for his team from the onset.

“We knew the first set would have been a key to the match as it would set the tempo and we were on course to seal it”, he said. “However we lost the set and it seemed away our energy and Suriname took advantage of this.“

A delighted Eric Aikman, the coach of bronze medal winners Suriname said that it was the most important match of the tournament for his players and they responded well.

“We found ourselves in a tough situation with only the winner advancing to the second round and the girls played hard for the first set and took it from there.“